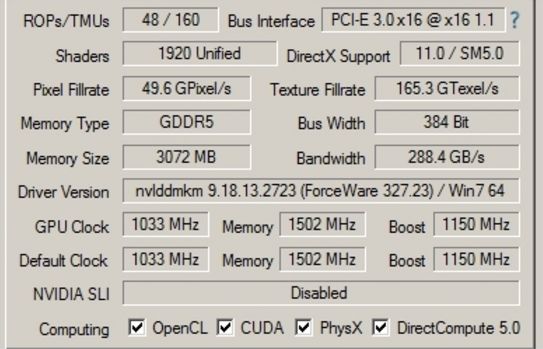 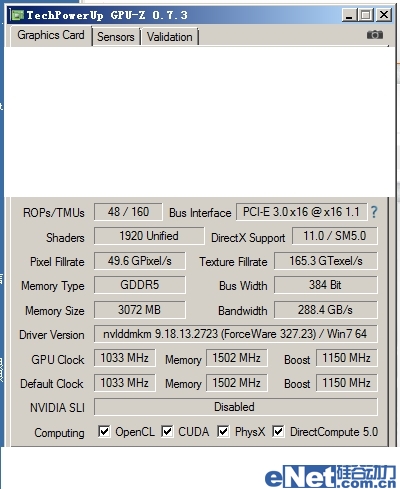 It is no secret that AMD has just announced their whole new lineup. For that reason October will be a month full of new GPU releases. If you thought that NVIDIA will just ignore this fact then you were wrong.

The R9 290 series will compete with GTX 780 and GTX 770. The R9 290X might be faster than 780 in selected titles, whereas the 290 non-X shouldn’t have any problem in beating the old Kepler GK104-based GTX 770. For that reason NVIDIA could be working on a new GPU equipped with a crippled GK110 processor. Actually this could be a forgotten GK114. Some sites, like SemiAccurate, claim that this GPU was canceled, but that’s not the point here, it could either be yet another GK110 or a completely new GK11x GPU. The 384-bit bus might suggest though that we are looking at yet another GK110 derivative.

According to Chinese website Enet, NVIDIA already has a sample of a new card. In fact the same website even posted a GPU-Z screenshot suggesting that the new card could be released pretty soon.

Few weeks ago a picture of GTX 750 Ti specs was posted along with an information about possible launch in September. Well, we all know that’s not going to happen. For that reason I suggest taking this information with a grain of salt. From my experience, there is no reason to hide the most basic device information unless you really want to post a fake story. I did check if the rest of the image was not photoshopped, and the results were negative.

Yes, this is how the website actually named it. It looks weird and I’m pretty sure this is not the final name for it. Anyway, this is not the most important bit of information here. The GTX 780i would be using GK110/GK114 GPU with 1920 CUDAs. In comparison to other GK110-based models it also lost some texture units, resulting in 160 total TMUs. The number of ROP units did not change and remains at 48. If this rumor is even true then I find it very interesting, apparently the slower Hawaii — R9 290 — will also use the same number of ROPs, just as 290X. For that reason NVIDIA would launch a card with the same number of ROPs as GTX 780. At least this explains which card is NVIDIA targeting here.

Moving on to clocks, we have a 1033 MHz base clock and 1150 MHz boost clock. This is a really good speed and I highly doubt this is a reference board, especially considering boost clock. The memory configuration has not changed a lot, and remains at a speed of 1502 MHz (6GHz effective). Of course it also has 3GB GDDR5 memory across 384-bit interface.

The source did not provide any additional information on the launch date. They suggest though it could be next month, probably right after R9 290 series settle comfortably on the shelves.