As promised, today we present the performance of the GeForce GTX 760, upcoming mid-range model from NVIDIA.

Of course all the data below is straight from the manufacturer, so expect slightly better results than you will see in the reviews. If you prefer more accurate, or let’s say more believable data then I suggest you skip this post and wait for the official announcement. Please don’t complain about the chart which has the axis starting from 50%, because this is how it originally looks and I didn’t want to manipulate it (plus the difference is sometimes so small that it would be hard to notice it with a higher scale).

The GeForce GTX 760 is replacing the GTX 660 Ti in the current line-up. It will remain as a fastest mid-range model for few months. Since many of you asked about the Ti model, I will just say it’s highly possible that NVIDIA will launch such card in the future. If you look closely at the charts below (especially the last one), then you’ll notice there’s still a gap for a new GTX 700 card, but it’s currently occupied by GeForce GTX 670. Without a doubt, the best solution for NVIDIA would be to rebrand it into GTX 760 Ti, of course with some cosmetic clocks manipulation (and GPU Boost 2.0 support).

As for the GeForce GTX 760 non-Ti. The card is competing with the AMD Radeon HD 7950 cards, cards because there are two models on the market: the original card with 800 MHz clock and the boost edition with additional 925 MHz boost clock. Both are included in this preview, along with recently announced GeForce GTX 770 and GTX 780 in the last chart. Bear in mind, the data for GTX 770/780 was generated with GeForce 320.18 drivers, whereas the GeForce GTX 760 was tested with yet unannounced GeForce 320.39 drivers. 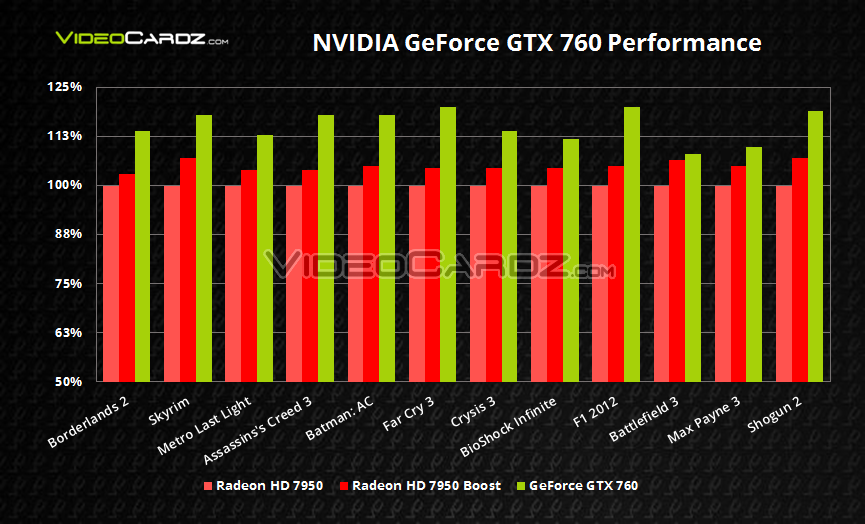 In NVIDIA-picked titles the performance is obviously higher for the GTX 760. The games which mostly depend on tesselation will surely benefit from this technology, but it won’t be a problem to get the same performance out of the Radeon HD 7950, which is known for good overclocking potential.

Now let’s see the difference between the 1080p and 1600p performance. The gap between the GTX 760 and HD 7950 cards is somewhere between 8% and 13%, definitely not enough to call it much faster. Moreover, the Radeon HD 7950 Boost shines in 1600p resolution due to wider memory bus, lowering the gap to just 6%. In Crisis 3 and Max Payne 3 the difference is almost non-existent. 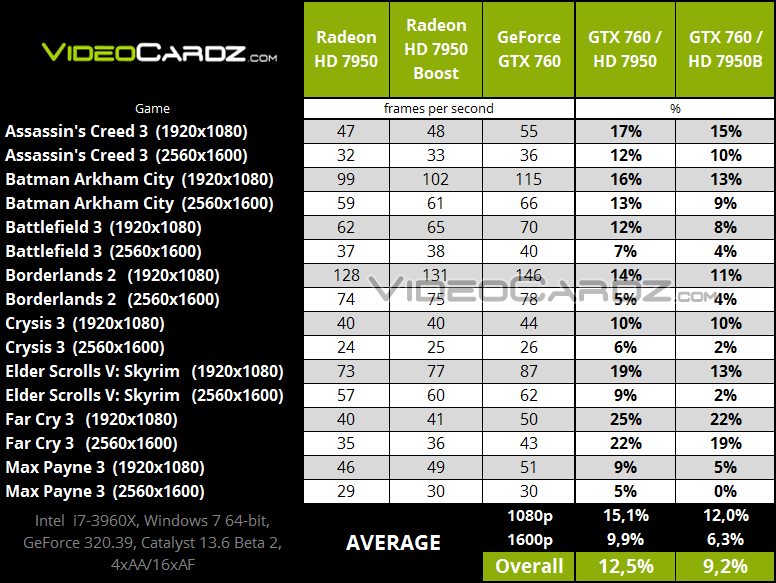 GeForce GTX 760 around 10% faster than Radeon HD 7950, of course that’s while comparing the cards at stock clocks. The position of HD 7970 GHz Edition should not be threatened by the new card (Radeon is already 12% faster). The latest GeForce 700 models from high-end segment are currently occupying top positions, quietly awaiting Radeon HD 8000 series.

Furthermore, NVIDIA claims that GeForce GTX 760 will be a great solution for SLI configuration, with much better scaling than Radeon models, although no data was provided to confirm this statement.

NVIDIA GeForce GTX 760 is surely closing the mid-range segment for now. Without any competition from AMD, NVIDIA has no problem dictating the price for their cards. That said, it’s believed that GeForce GTX 760 will cost around $299, just as much as GTX 660 Ti at launch. Which is not shocking, but it still doesn’t feel right if you realize the GTX 670 is available for just $339. Note that at the time of writing the price was not confirmed yet.