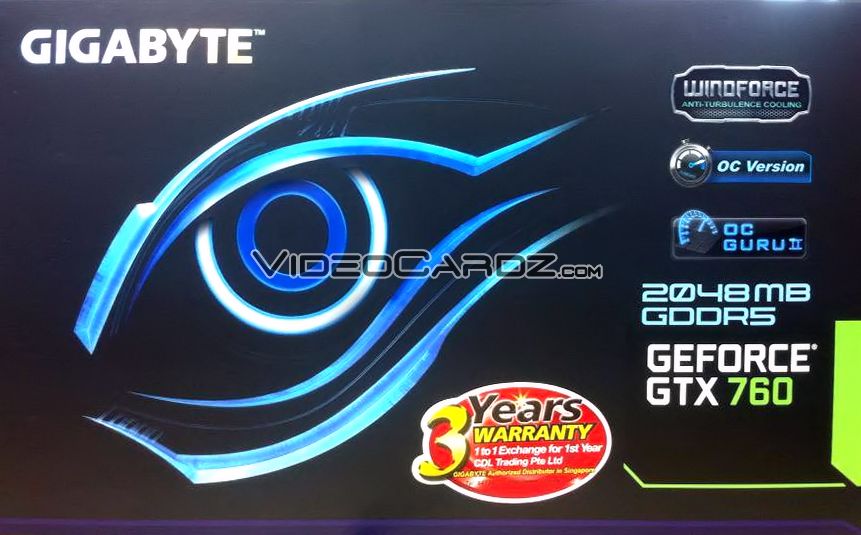 Gigabyte is preparing its new GeForce GTX 760 packed with WindForce cooling solution, as revealed by a picture of the box.

Unfortunately, the graphics card itself was not pictured, so the image of the box has to be enough for now. Apparently Gigabyte will equip their latest mid-range model with the WindForce cooler, probably in 2X variant (dual-fan). The box also reveals that the card will be factory-overclocked out of the box, so expect 1100+ MHz goodness. We expect metal dual-slot cooler, similar to GTX 770’s and GTX 780’s, only with less fans.

The Gigabyte GTX 760 OC (GV-N760OC-2GD5) comes with 2GB GDDR5 memory tied to 256-bit interface. According to the recent leaks the GK104-225 graphics unit would sport 1152 CUDA cores, which makes 2 SMXs less than full Kepler GK104 processor. This is something that even higher clocks won’t cover up. The dissimilarity in performance will be definitely noticeable at higher resolutions.

According to the etailer, the card will be available for around €300/$300. Gigabyte is offering a 3 years warranty with it.

Many thanks to Nestley Superstars for the picture!