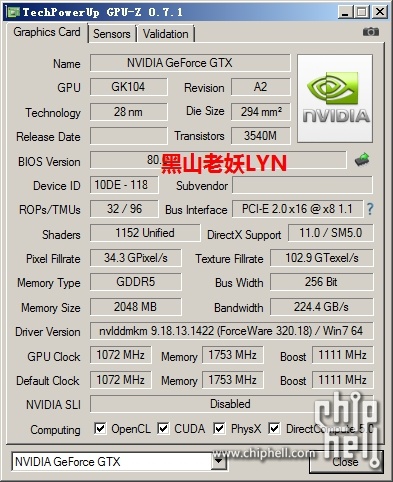 An alleged Geforce GTX 760 screenshot GPU-z has been posted on Chiphell forums.

GeForce GTX 760 in a nutshell:

The leak is quite interesting for two reasons. As it turns out, the card would use 1152 CUDA Cores rather than 1344 as reported in other posts. This only proves that’s always worth to wait before taking the final statement. Apparently the new GK104-225 GPU is a cut-down version known from GeForce GTX 660 OEM,  and not the one known from GeForce GTX 670 or GTX 660 Ti. However due to different width of the memory bus, we can’t say it’s the same.

The latest mid-range model also has less texture units — 96 — than both previously mentioned cards. The ROPs count did not change and remains at 32.  We don’t know if the clocks are from reference model, but we are quite sure that the memory clock has the same speed as GTX 770, exactly 7010 MHz effective frequency. Speaking of the memory, you can clearly see that the card is equipped with 2GB GDDR5 memory across 256-bit interface, so it’s not 192-bit as some of you tried to convince others. Anyway, the GPU clock runs at 1072 MHz for base and 1111 MHz for boost, which would be one of the highest clocks for the reference cards in the history, but we don’t know if this is the non-reference model yet. What we do think however, is that the card would feature GPU Boost 2.0.

According to the leaker, NVIDIA did in fact want to use the GTX 760 Ti naming, but they dropped the Ti idea later, so the card ended up with the pure GTX 760 sexiness.

The GeForce GTX 760 is supposedly arriving on June 25th, with a slight possibility that NVIDIA may launch it sooner. We don’t know the actual pricing yet, but first leaks from the stores suggest €299/$299 price tag.

Source: Chiphell
Thanks to mic08n64 for the tip!