NVIDIA GeForce GTX 760 To Be Released On June 25th

The 26th week is most likely the launch week of the latest addition to NVIDIA’s GeForce 700 series. We are looking at two dates, June 25th (Tuesday) or June 27th (Thursday). Earlier reports suggested that GTX 760 would arrive in the mid-June, but for some reasons the launch was postponed by a week. Although it is believed, that the delay is caused by AIB partners who were not yet ready for the transition to the new card. The transition is the key word here, because the GTX 760 would be nothing else than the GTX 670 itself.

While the specs are not yet verified, some sources claim GeForce GTX 760 would be a faster variant of the GTX 670. We are expecting a higher clockrate on both the graphics processor and the memory.

According to our previous reports the GTX 670 would be replaced by GTX 760 Ti, whereas the GTX 760 would be a rebadged GTX 660 OEM (the one with 1152 CUDAs). Thus, we have conflicting information and we are still unsure whether the GTX 760 is indeed the GTX 670 under a new name, or it’s rather the Ti variant. What is known for sure is that NVIDIA is planning only one card for June, which is the non-Ti model.

The leaked roadmap from May

If you remember the the roadmap we posted few weeks ago, then you should know that so far everything as seen on the slide was correct. Therefore it is more likely that the GTX 760 would be a slower and cheaper model than GTX 670, but based on a different GPU (GK104-225).

We will keep digging and asking, so stay tuned. 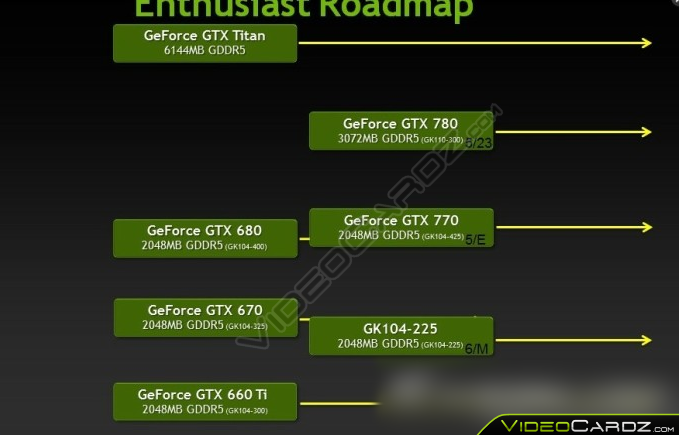