GeForce GTX 770 in a nutshell: more cores, the fastest memory ever (7Gbps) and GPU Boost 2.0


If you already own a GeForce GTX 670, then the upgrading to GTX 770 doesn’t necessarily make sense. In fact, the GTX 770 is advertised as an upgrade to GTX 570 (with 65% more performance). NVIDIA claims that their new card will provide nearly twice the performance per watt in comparison to Fermi model. A reference design of the GeForce GTX 770 will feature a TITAN cooler, which will provide a much quieter experience, supposedly quieter by 4dB, than both GTX 570 and GTX 670. On the contrary to GTX 780 launch, NVIDIA gave a green light to its partners to show a custom solutions for the card the day it’s announced.

GeForce GTX 770 is equipped with the same GPU as the GTX 680 – GK104 (labeled as GK104-425-A2). With 8 SMX enabled, we have 1536 CUDA cores, 128 texture mapping units and 32 raster units on board. By default, there’s 2GB GDDR5 memory size, but it will also be offered in 4GB variants. Moving forward to clock speeds, the GPU is operating at 1046 / 1085 MHz for base and boost respectively. That’s indeed faster than GTX 680. Although, the main difference is not the GPU clock. Card comes with faster memory modules, working at 7010 MHz effective speed. Due to 256-bit wide interface, this massive memory overclock will not impact the performance drastically. The memory bandwidth was measured at 224 GB/s, which is 32 GB/s more than GTX 670’s.

On the physical side we have 10.5 inch long and 4.376 inch wide PCB (the same dimensions as the TITAN’s and GTX 780’s). Card is equipped with 6-pin and 8-pin power connectors. The thermal design power is 230W, with a requirement of 600W power supply.

Specifications aside, time to look at the performance. First up, let’s see how the GTX 770 performs in comparison to recently announced GTX 780 and our old friend Radeon HD 7970.

Both charts were created with the following testing environment: Intel i7-3960X processor, 2560×1600 resolution, high settings and no anti-aliasing enabled. Please note, these charts are only for the reference, check below for detailed results. 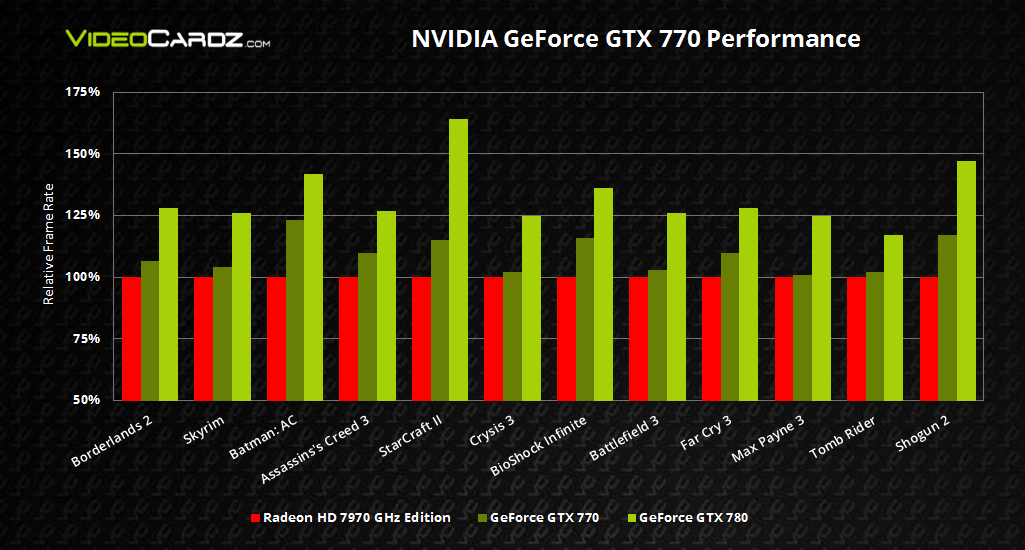 NVIDIA is proudly telling us that the GeForce GTX 770 will perform almost 25% better than Radeon HD 7970 GHz Edition in Batman Arkham City. With Far Cry 3, BioShock Infinite or Assassin’s Creed 3 the gap is smaller. In AMD-picked titles the dissimilarity in the performance is almost nonexistent. In fact, you will easily be able to outperform the GTX 770 with just a small overclocking on the Radeon card.

Using the Frame Capture Analysis Tool (FCAT) NVIDIA measured the scaling of the card in SLI configuration. According to their chart, two GTX 770s are doing exactly what they are supposed to, almost doubling the performance while connected with the SLI bridge. 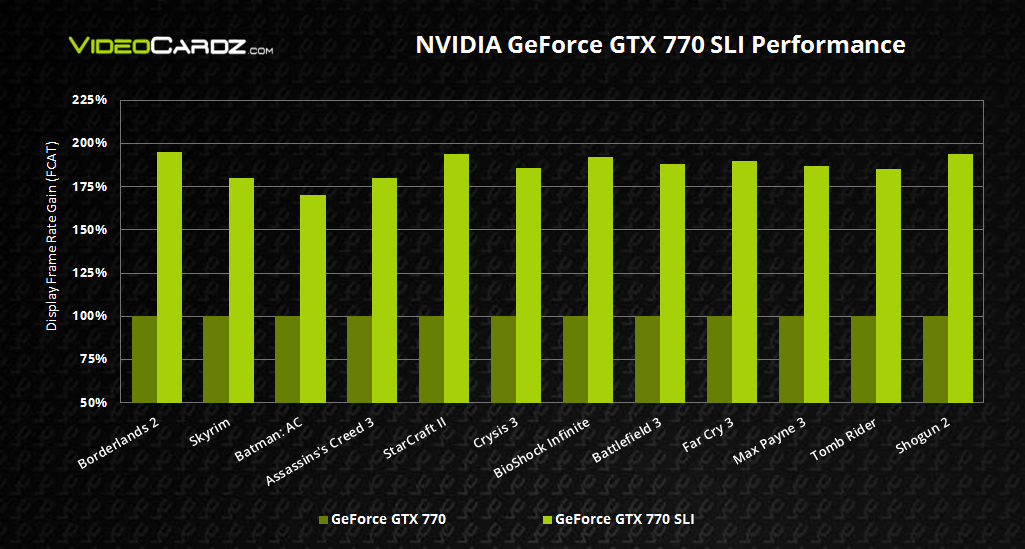 Okay, these charts look cool, but they don’t really tell us anything more that we would expect from a GTX 680 refresh. Thankfully, I also have a table with more accurate data.

Testing environment is just the same as the one above, only now we are also going to see the results in 1920×1080 resolution and with anti-aliasing enabled. 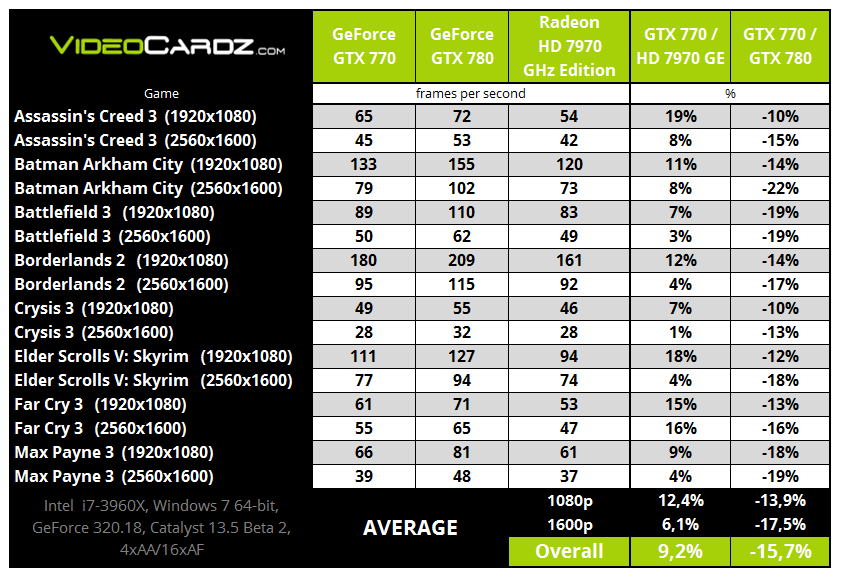 The GeForce GTX 770 would be 9% faster than Radeon HD 7970 GHz Edition. The difference mostly depends on the resolution. The 384-bit wide memory bus on Radeon card gives significantly higher memory throughput while playing games with more detailed textures. However, if you are 1080p gamer, then GTX 770 will do just fine.

If you happen to own the GTX 670 or 680 already, then according to our internal tests, there’s absolutely no need to upgrade your card. You can obtain very similar results with just a small adjustment of clock frequencies. Same goes for Radeon HD 7950/7970 users, if your card can easily reach 1100 MHz clock, then I would think twice before buying the GTX 770.

On the other hand, if you are a real graphics cards enthusiast, following each release, and want to give a TITAN-like cooler and GPU Boost 2.0 a try, then GTX 770 would be a very good option, especially since it will most likely cost just a half of the TITAN’s price (although I would still recommend custom solutions).

TLDL: GeForce GTX 680 in a silver disguise, also known as GTX 770, takes the mid-range segment performance crown back from HD 7970.