According to Fudzilla the price of GeForce GTX 780, the upcoming high-end GK110-based graphics card from NVIDIA, would set around 500 to 600 euro.

This is the end user price, which includes high European taxes. That would be around 20% more than the launch price of the GeForce GTX 680. Chinese sources claim that it will cost 3999 yuans, that’s exactly half the price of the TITAN, so it should correspond to $/€ 500 price tag.

Moreover the price of the GTX 770 is somewhere between €360 to €400, which depends whether you like the reference cooler or aftermarket designs.

The GeForce 700 series are a refresh of the Kepler architecture, with a long-term plan to replace current GeForce 600 models. Each product will be competitive at its price level. AMD is preparing a counterattack, which was advertised on their Facebook page. It is unknown whether this means a new product or a new game bundle.

The specifications of the GTX 780 are also beginning to clarify. According to few sites the card will make use of 2304 CUDA cores, not 2496 as previously reported. There will be a 3GB GDDR5 memory on board, with 384-bit wide interface. It’s believed that it will be 25% faster than its predecessor.

Some etailers however, have a different idea for a price of GTX 780. This is what I’ve found in Finnish store: 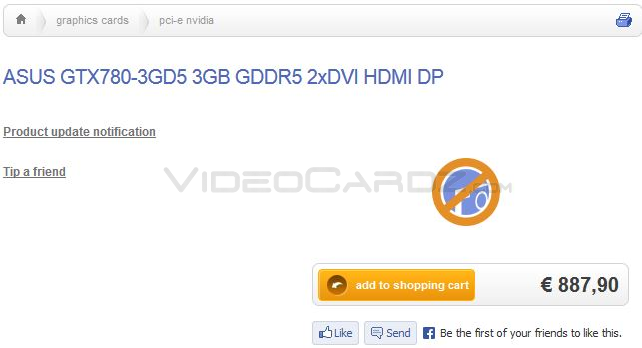