Over the past few days there were only two GPU related topics discussed on many sites and forums. That’s obviously the launch of the upcoming GeForce 700 series and AMD’s future Volcanic Islands architecture.

The picture of the Hawaii GPU is from SemiAccurate forums. Looks like a pure speculation.

Thanks Skr for finding the original source!

I didn’t post anything about the Volcanic Islands yet, because there were more questions than answers, but today we might finally have something to discuss. The upcoming Volcanic Islands architecture would be the first GPU generation to use 20nm fabrication process. That’s not confirmed yet, in fact, SweClockers have a completely different opinion: the VI architecture would still use 28nm process. The Swedish site also revealed possible codenames of the new GPUs: Hawaii, Reykjavik and Honolulu. The Volcanic Islands series would arrive in the fourth quarter of this year, as reported in the interview with Rage3D (there’s also a reference to these GPUs):

“The next generation of graphics cards – Volcanic Islands – is coming this year and shaping up nicely. When you name products after places, it leads to interesting thoughts about where to hold events surrounding that namesake product. Typically places that are cheap to get travel to internationally for a worldwide congregation are preferred, so I’m off to renew my passport on the off chance I’m headed to Reykjavik later this summer. But I sure as hell wouldn’t complain about being sent to Honolulu, either.”

At this moment, it is unknown whether the VI would use Radeon HD 8000 or HD 9000 naming. If I were to judge, it’s getting little late for new HD 8000 cards. Maybe AMD will just launch two high-end cards (with faster clocks or more RAM), rather than the whole series, to make a smooth transition to Radeon HD 9000 “VI” graphics cards. Anyway, unless we get more information about this matter I will stick to the HD 9000 series while describing VI GPUs.

AMD doesn’t really have a proper counterpart for GK110, at least not one die. However this may change due to the leak from Chiphell forums. According to the leaker, who was kind enough to share more insight on the new architecture, we are now expecting a big announcement from AMD. The Hawaii GPU would supposedly use 4096 Stream Processors, on one die. That’s the same amount as Radeon HD 7990. Believe it or not, there’s also the information about a 512-bit interface. The GPU would  be supported by 4GB memory. The specifications are simply a doubled Tahiti numbers. Only the memory bus and memory size are different.

Here’s a comparison of the Tahiti and Hawaii GPU, as posted by WCCFtech:

And here’s the GPU itself, on a slightly enhanced picture from Chiphell. I have seen a lot of fake images, diagrams are slightly harder to make. This looks professional, but AMD diagrams don’t look like this. Maybe this is just a preliminary state of the GPU or someone just recreated it. 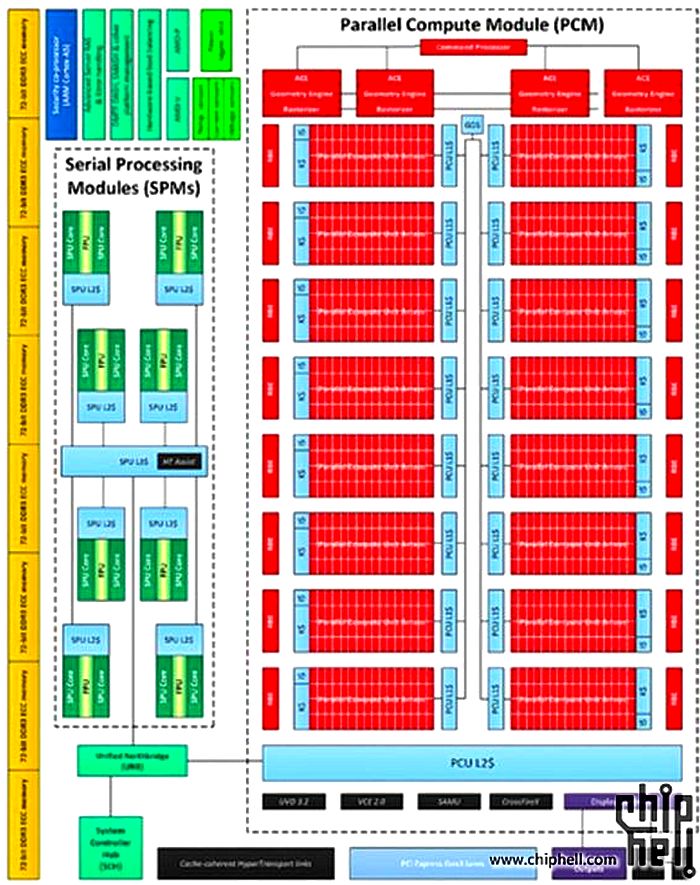 There’s a good reason to believe that these specs are possible. AMD slept away the possibility that NVIDIA could use GK110 as a consumer part (not that the whole GPU-enthusiasts community expected that). Now, they are working hard to come up with something that would not only compete with the TITAN-like graphics cards, but also put a new king on the throne (this is a reference to XFX HD 7990 advertisement:  “They may be titans, but we are Gods.”).