According to Fudzilla, AMD is working on a new set of games with their Never Settle program. The new bundle would include 3 new titles, one of them is supposedly yet unannounced title.

As reported by Overclockers UK the Never Settle Reloaded bundle helped the Radeon HD 7970 and Radeon HD 7950 reach a December’s level of sales in February. December is believed to be the best month for Radeon graphics cards sales. The Never Settle has a biggest impact on the high-end segment, where the new owners of the cards receive more titles for free. The first bundle included the titles like FarCry 3, Hitman Absolution, Sleeping Dogs and a rebate for Medal of Honor Warfighter. The Reloaded Edition of the bundle added three games: Crysis 3, Tomb Rider and Bioshock Infinite. According to the source, the upcoming edition would include at least three highly anticipated games: Watch Dogs, Battlefield 4 and a game which was not yet officially announced. Yesterday DICE and EA announced the Battlefield 4, which is coming to multiple platforms this fall. The game was showcased using the latest AMD card, a reference Radeon HD 7990.

The new promotion would almost certainly include Radeon HD 7790 and Radeon HD 7990. The latter card could receive even more titles (currently a purchase of HD 7900 series card  is eligible to receive 2 games, while with the CrossFire you can get 6). There is no date given for the next bundle to arrive. The current one started on February, which still leaves a window for the new announcement. My bet is that the Never Settle Reloaded #2 would arrive on summer holidays. 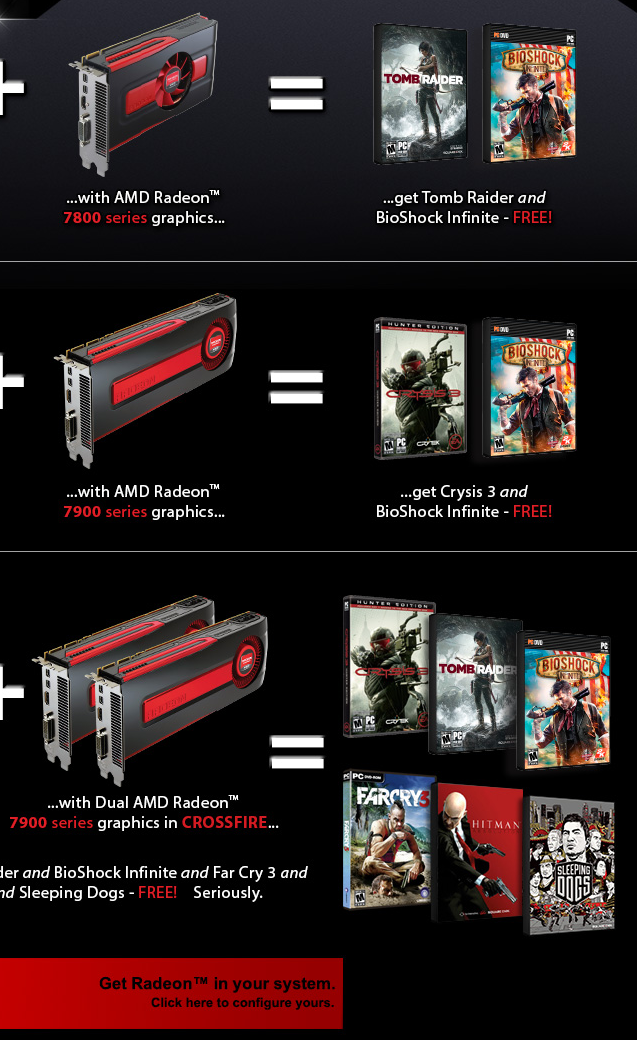