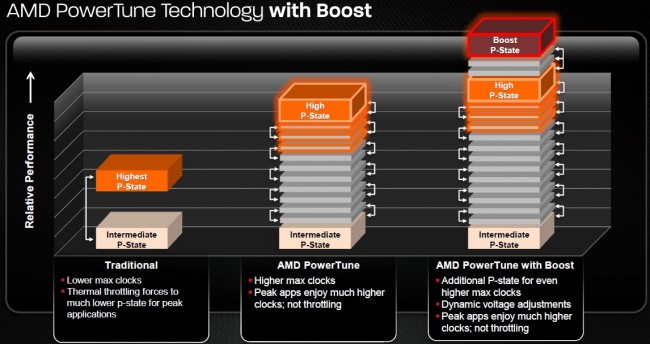 TechPowerUP reports that they discovered a trace of AMD’s upcoming GPU Boost Clock feature, only now in full hardware mode.

NVIDIA did a remarkable job with this new feature called GPU Boost.  NVIDIA’s boost is a dynamic GPU clock adjustment, found only in Kepler based cards, that is made depending on the demand of the computing power and temperature of the GPU using dedicated circuitry communication with the driver (Keith touched on this in the intro of his GPU OCing Apps Article). This feature controls both clocks and voltages in multiple GPU states. AMD copied this feature with their refreshed graphics cards, later to name them GHz or Boost State Editions. The only problem with these cards is that the predefined boost clock is configured solely through software implementation. Along with ZeroCore Power, the PowerTune with Boost makes AMD cards competitive with the current NVIDIA series. But certainly there are scenarios where NVIDIA’s dynamic solution has better potential and relative performance gains over a predefine boost.

The latest AMD Display Library (ADL) documentation revealed that the company might be preparing a new technology, possibly even more advanced than NVIDIA’s Kepler boost. Current AMD series use the Overdrive 5 feature-set, which is a low-level driver interaction environment for 3rd party applications. Upcoming consumer Radeon HD 8000 series will possibly use Overdrive 6, which would support three new features:

These three new features would be a part of the new dynamic boost technology. The rumor has it, that it would control the clocks of both GPU and memory (NVIDIA’s GPU Boost does not control the memory clock), depending on the current demand for power, while taking into account the maximum power limit and temperature level. The source is also pointing out the fact, that the boosting of the memory speed on AMD GPUs no longer cause a flickering effect.

This discovery only proves what was said for a long time. The PowerTune Boost technology will receive a new upgrade, but it will now be controlled by hardware along with the software. What’s next is to implement the Adaptive V-Sync feature introduced by NVIDIA with the GeForce 600 Series. 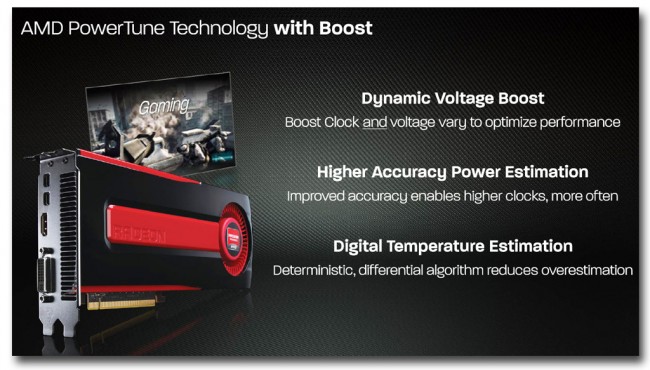