It seems that there is still one card missing from the GeForce 600 Series. Earlier rumors said that there will be no more cards based on current Kepler GPU. Needless to say, there was a lot of confusion when the leaked code names mentioned more GK106 based cards. But now we know why, it’s a new GeForce GTX 660 SE graphics card from NVIDIA.


Following a similar roadmap as year ago, when the GeForce 560 SE was announced, NVIDIA is about to introduce a new model of GeForce GTX 660. This time it’s called GTX 660 SE and it would receive a GK106-250 GPU. As we thought, this card will fill up the gap between GK107 and a full GK106 silicon. This means that the GTX 660 SE has 768 CUDA cores. Apart from that there are no significant changes to the architecture. It has 24 Raster Operating Units and 192-bit memory interface. If the leaked GPU-Z screen-shot is taken with the reference card, then we are talking about the card with 2GB of GDDR5 memory. The GPU is clocked at 928 MHz and it has a boost clock of 1006 MHz. In comparison to full GTX 660, this has a slower memory running at 1400 MHz. 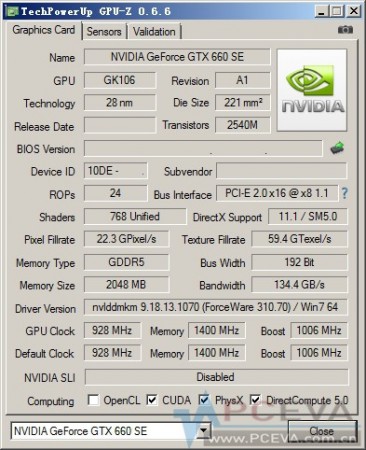 The leaker has also provided some basic performance benchmark. The GeForce GTX 660 SE will be around 20% faster than GTX 650 Ti, while it will also be slower than GTX 660 by 15%.

As for the design, it looks like the card will be based on the same board from GTX 660 and GTX 670 (which is not surprising). This particular model would be equipped with two DVI’s, HDMI and one DisplayPort. It’s hard to say what is the exact released date of this graphics card, but I bet it’s planned for late January.