HIS Digital is ready to launch its Radeon HD 7970 X2 graphics card. Tom’s Hardware received a final revision of this model for testing, meaning we have all the necessary data to judge its performance.

Card was firstly introduced during Computex 2012, but there wasn’t really a lot of information regarding this particular moment until now. Even thought card it not yet listed at official manufacturers website, we can say we know everything about it.

HIS HD 7970 X2 (what’s important, this is not X2 — I actually look forward to learn how HIS dealed with this problem of the same cards called X2) is a dual-chip graphics card powered by two Tahiti XT GPUs. Card comes with a base clock of 1050 MHz, and it seems that it will not receive the boost clock in retail revision (considering this is just a review sample). This model has 6GB of GDDR5 memory across 768-bit interface (2*384). Surprisingly the card is not using a PCI-E 3.0 Crossfire chip, but a Lucidlogix with PCI-E 2.0 support. Although, according to the review, it didn’t really affect the performance that much.

HIS HD 7970 X2 comes with a triple-slot cooler with two 95mm fans. There’s a lot happening on the bracket, with a huge amount of display connectors. That’s because HIS thought that since they made probably the fastest card on the market, then why not provide a multi-monitor support, where by multi they actually meant six of them through the Eyefinity 6 technology. If you decide to buy one of these cards, then you will be able to choose from variety of outputs, including four mini-DisplayPorts, HDMI or DVI.

Card has a completely redesigned power section. It’s not that powerful as PowerColors Devil13, since it only has 6+2 phase design, but thanks to such limitation it consumes less power than it’s more expensive opponent. But interestingly, card still managed to perform better than it’s HD 7990 adversary.

For more details and comparison to other dual-gpu cards head on to Tom’s Hardware review. 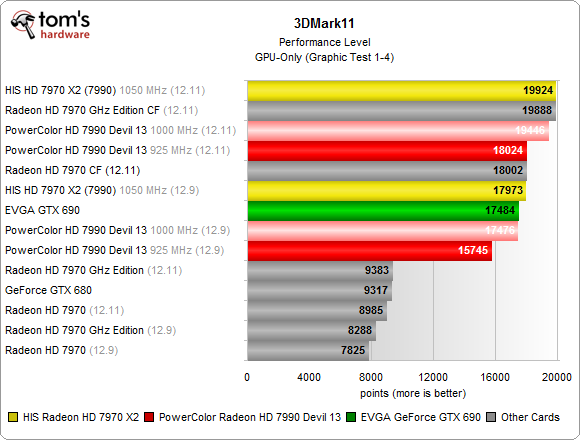 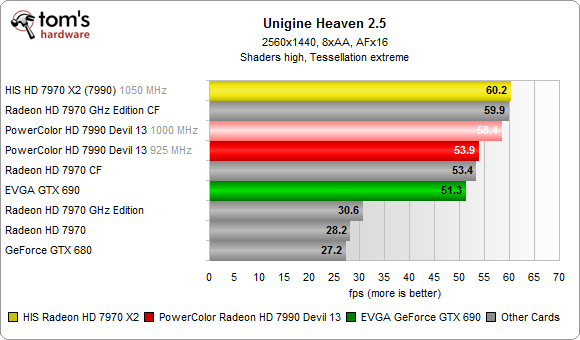