Final Revision of HIS Radeon HD 7970X2 Pictured and Detailed

We can finally have a look at this new model of Radeon HD 7990 aka 7970X2 from HIS Digital, which was originally shown at Computex in June. Surprisingly, manufacturer has not changed the HD 7970 X2 naming to HD 7990 for this card.

Tom’s Hardware provided some feedback and suggested some improvements to HIS for their dual-gpu graphics card. It seems that the manufacturer is ready with its HD 7970X2, since the card that they just received is no longer an engineering sample.

First Radeon HD 7990 cards started appearing in late August, since then TUL has launched its design under the brands of PowerColor, VTX3D and Club3D.

HIS Radeon HD 7970X2 would also feature three-slot design. What is also similar is the requirement of three 8-pin power connectors. It appears that the main difference between PowerColor’s and HIS design is the number of fans installed. HIS HD7970X2 would feature two large fans for each GPU, while PowerColor’s has three. Card has a higher GPU clock than Devil13 – 1050MHz. The 6GB of GDDR5 memory is clocked at 1500 MHz (that’s faster than any HD7990 on the market). It’s also worth to mention that the card from HIS has more phases on the VRM – 16, while PowerColor’s Devil13 has ‘only’ 14.

Tom’s Hardware promised that their review will include this card along with HD7990 Devil13 and GTX690 from EVGA. 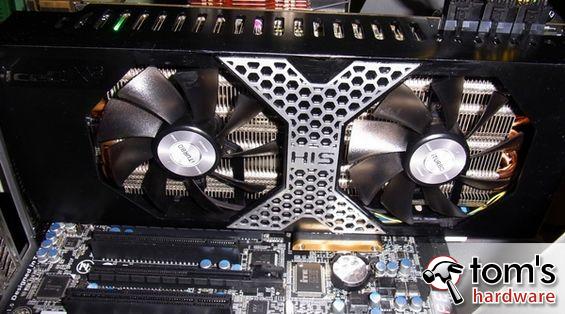