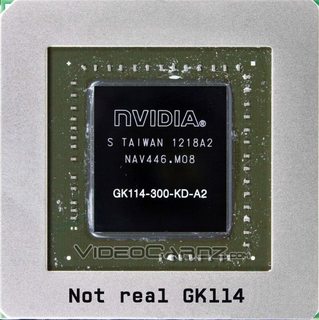 Ever since NVIDIA first showed us Kepler in its full form as the Tesla K20, people have been asking about a GeForce card based on this silicon, GTX 780. However it was then speculated by OBR-Hardware that there would most likely not be a GeForce GTX 780 GK110 based card. Since then we have heard little, if anything about what GK11x derivative would see the light of day.

SemiAccurate is citing two sources as naming the “big gaming GPU”, meaning the 780, from NVIDIA as the GK114 and the GK114-GX. Similar to AMD, this chip is expected to be late and not see a release until the earliest being March 2013, but S.A. believes April or May is much more likely. Also like AMD, the jump in performance is not supposed to be mind boggling; partially due to die size restraints and in my opinion this is to be expected with Maxwell now on the horizon. If NVIDIAs next GPU release completely demolished the GTX 680, then the market enthusiasm for Maxwell would shrink dramatically when the time comes. So you have Maxwell playing a role most likely in expected performance and you also have AMD, which we wrote on yesterday, expected to jump only by 15%.

All of these factors play into the expected performance of GK114, however unlike AMD, NVIDIA has more room to play in the TDP department. This is due to the highly efficient architecture of Kepler. According to S.A. “those who have been briefed” are also saying NVIDIA is expected to have the same 15% jump in performance over the GTX 680 as was reported on AMD. So basically the next generation of silicon from both NVIDIA and AMD is only expected to gain 15% performance increase over their predecessors. However according to our sources the increase for the GTX 780 would be around 25% over the GTX 680, instead of the 15% S.A. is citing. This may not be the series launch you will tell your grandkids about, but may remind you more of the G92 vs G92b period. The GTX 600 Series was restrained heavily by its small 256-bit Bus, I believe NVIDIA could achieve this 15% increase simply by giving it the bus width seen on Fermi cards, instead of the Bus we saw on the FX5900 Ultra.