In my earlier post I described the slowest model of GeForce GTX 650 Ti from ASUS. From what I’ve learned it seems that the manufacturer is preparing at least three different models of this card, including a TOP variant.


I doubt that any ASUS employee could tell you how many cards they launched since January. Well I can, they made 26 Radeon HD 7000 graphics cards and 28 models from GeForce 600 Series. So there are at least three new ones coming for GeForce family. This would include the DualFan model, clocked at 928 MHz, the OC Edition, which is still a mystery, and the TOP Edition, which would feature a 1032 MHz clock.

Both OC and TOP Editions will be equipped with a DirectCU II cooling solution, while the cheapest model would have a DualFan cooler. All three cards are equipped with 1GB GDDR5 memory, and as mentioned earlier with 128-bit interface. None of those cards will support SLI configuration, so it’s quite clear that GeForce GTX 650 Ti will not feature this technology by default. 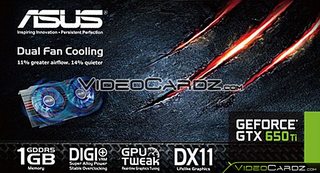 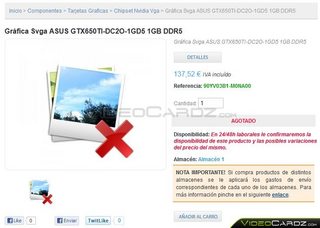