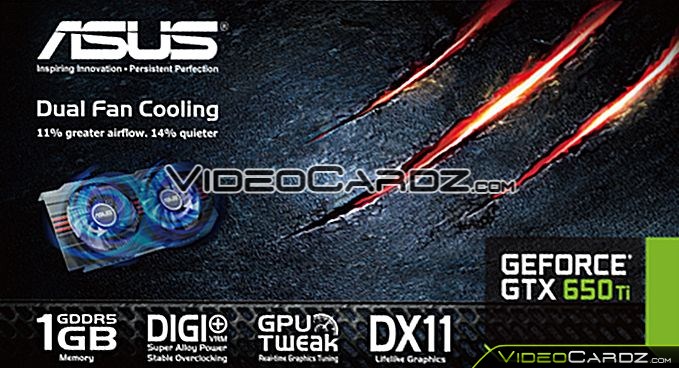 If a rumored release date is true, then we are still more than one week before GeForce GTX 650 Ti launches. The web is already full of unconfirmed specs, but thanks to some data I found, we can make this more precise.

ASUS is preparing a new GTX 650 Ti graphics card, which will be equipped with 1GB of memory. This model would not feature DirectCU II cooling — even though it looks almost the same it would actually be called Dual Fan (I’ve seen a picture of the card, but it’s too small and blurry to post). While DirectCU II would purportedly provide 20% better cooling, the Dual Fan would increase the airflow only by 11%, and overall performance by 14%.

Probably the most disappointing fact is that it features only 1GB memory capacity (considering GT640 with 4GB, that’s rather low). My data does not say if the GTX 650 Ti utilizes GK106 GPU, but if it doesn’t  — I would be surprised. Anyway, what is true is that the card has 576 CUDA cores. From the specs leaked by ArabPC, there is one difference. The GPU clock is actually lower, it’s 928 MHz. The memory clock is 1350 MHz (5400 MHz effective) and as mentioned in earlier post, there is no Boost clock. Unfortunately, also the 128-bit memory interface is real, so GTX 650 Ti was most likely designed  for lower resolution monitors.

ASUS GeForce GTX 650 Ti is equipped with two DVI’s, one VGA and HDMI (it’s possible to use all four display outputs at once with NVIDIA’s Surround technology). It seems that almost every new card from ASUS now features DIGI+ VRM with Super Alloy Power, the GTX 650 Ti is no different — however, there is no data how many phases does PWM have with this card. The dimensions for this model are 21.3 x 11.9 cm (dual-slot). One more thing, it seems that this card does not support SLI configuration.