Few days ago, guys from PC Perspective posted some rumored specification of upcoming flagship model from AMD — Radeon HD 8970. There are two reasons why I didn’t post anything about it. The first is that their information was simply based on quite old ‘leaked’ slide, which as far as I know is fake. However multiple websites continued to repost this data without getting into details and checking if such specs are even possible. So as a second reason I decided to prepare my own analysis (which obviously takes time) based on five previous generations of Radeon graphics cards to verify that rumors.


PCPerspective suggested few basic specification details regarding Radeon HD 8970 graphics card. What they included was the number of Stream Processors, estimated die size and memory bandwidth. Their data is actually valid in case of Stream Processors (SP) count. My in-depth analysis of previous flagships’s specs provided some predictions and those predictions are mostly similar to those specs. But let’s analyse all of this data. 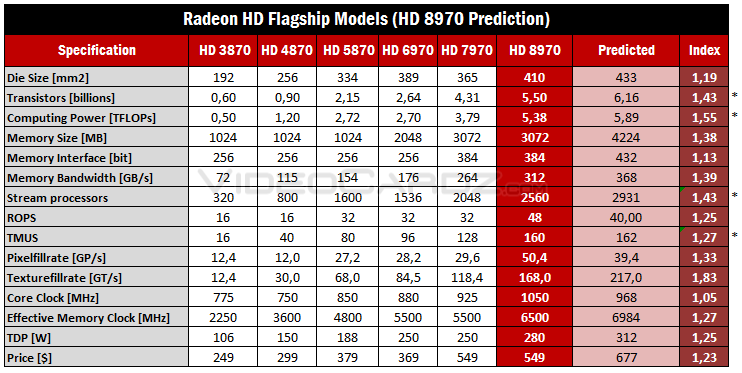 * means that not all models were included in calculating the index.

Estimated die size is 410mm2, the trend line suggest that almost every flagship model arrives with slightly bigger die. Radeon HD 8970’s GPU should be no different.That’s because new GPU will have more SPs and those will have to fit on the processor still made in 28nm process. Not to mention more heat and requirement for more dissipating area.

The density of the Stream Processors in Tahiti XT and rumored 2560 Stream Processors for Venus XTX would suggest that Radeon HD 8970 could arrive with at least 5,4 billion transistors. Computing power is correlated to number of Stream Processors and GPU clock. Radeon HD 8970 will surely feature boost technology, but in this analysis we are predicting the base clock. AMD has to launch their new flagship card with at least 1GHz clock. However this number will likely be something around 1050 MHz, with a boost clock estimated at 1100 MHz. Anyway, this gives us the computing power of around 5,25 TFLOPS.

Let’s talk about the architecture. New GPU will be quite similar to the Tahiti XT, so we are not expecting huge changes to the Compute Units layout. In Tahiti there were 32 of CUs, holding 2048 SPs. In HD 8970’s GPU there might be as many as 40 CUs with 2560 SPs. This would also suggest that the number or Texture Mapping Units would rise to 160 and Raster Operating Units to 48. This obviously increases the Pixel and Texture Fillrates. You can see that prediction states that there should be 40 ROPs, not 48. I actually think that’s more reasonable, especially considering how Pixel Fillrate changed throughout three previous generations.

We all know that Radeon HD 8970 will be launched with at least 3GB of memory, but as you can see the trend line says it might actually be higher number. We might expect higher memory capacity of 4GB’s. However there is one reason why 4GB might not be possible right now, and that’s the cost of too many memory chips on a single card, so let’s stay with 3GB.

PCPerspective suggest that Radeon HD 8970 would arrive with a bandwidth of 322 Gb/s. I’m not so sure about that, since the memory clock would have to be increased to 6800 MHz on 384-bit interface, and that’s a huge gap in comparison to HD 7970’s 5500 MHz. The bandwidth of 312 Gb/s sounds more reasonable, since this requires only 6.5 GHz clock. But we shouldn’t be surprised when AMD launches their card with even higher clock.

In terms of TDP, there shouldn’t be much change. AMD knows that their cards are power hungry and people started to notice the difference between 200 and 300 Watts. AMD will do their best to keep this number as low as possible, it should oscillate around Tahiti’s 250W, with a small increase. I expect this number to rise to 280 Watts.

Finally we have the price. As you can see all previous flagships were quite cheap considering current $500 price tag for current fastest AMD cards. So the company will surely try to earn some cash by launching their series before NVIDIA, this means $549 price will likely stay for the next launch. However there is a hope that this price will be actually lower, making their cards even more competitive.

I will also add my two coins into this discussion. I managed to confirm that AMD Radeon HD 8970 will be launched with 2560 Stream Processors, that’s unless AMD would change plans for this card. What I also know is that AMD is currently working on board layouts. First engineering samples will be available in November/December. Current release date is February 2013.

Feel free to share your own predictions it in comments below. If you want I can prepare similar prediction for GeForce GTX 780.