GeForce GTX 650 and GeForce GTX 660 will be released on September 13th. The GTX 650 is not particularly interesting model, but on the other hand GTX 660 looks promising.

This is some-what a re-energied version of GT 640. As you can see there are already four GK107-based cards. The difference between those and the GTX 650 is a GDDR5 memory type, this increases the memory bandwidth to 80 GB/s. Card will arrive with only one GPU clock of 1058 MHz (this model does not offer GPU Boost technology). There will be two variants of this card with different memory size: 1GB and 2GB. Card will require one six pin power connector, while the TDP is 64W, so the connector is most likely for higher overclocking headroom. The latest reports say that MSRP is $149.

This is the first graphics card to feature GK106 GPU. It has five SMXs with 192 CUDA cores each, so the card has 960 CUDA cores in total. It will arrive with 2GB GDDR5 memory by default with 192-bit memory interface. Just like the GTX 650, it will require one 6-pin connector, but TDP is much higher – 140W. Also this card will feature all technologies from high-end Kepler cards – GPU Boost, SLI and A-Vsync. This card will be available from $229. You can find other details below.

If you look closely into the table, you will notice that there’s a huge gap between GTX 650 and GTX 660. What we already know is that GK106 will arrive in at least two other iterations (notice how many cards are based on each GPU). Some people call them GTX 655 and GTX 650 Ti or GTX 660 SE. But for now, we only know that one of them will feature 2GB 192-bit memory and the other 2GB 128-bit configuration (that’s not enough info to put them into the table below). 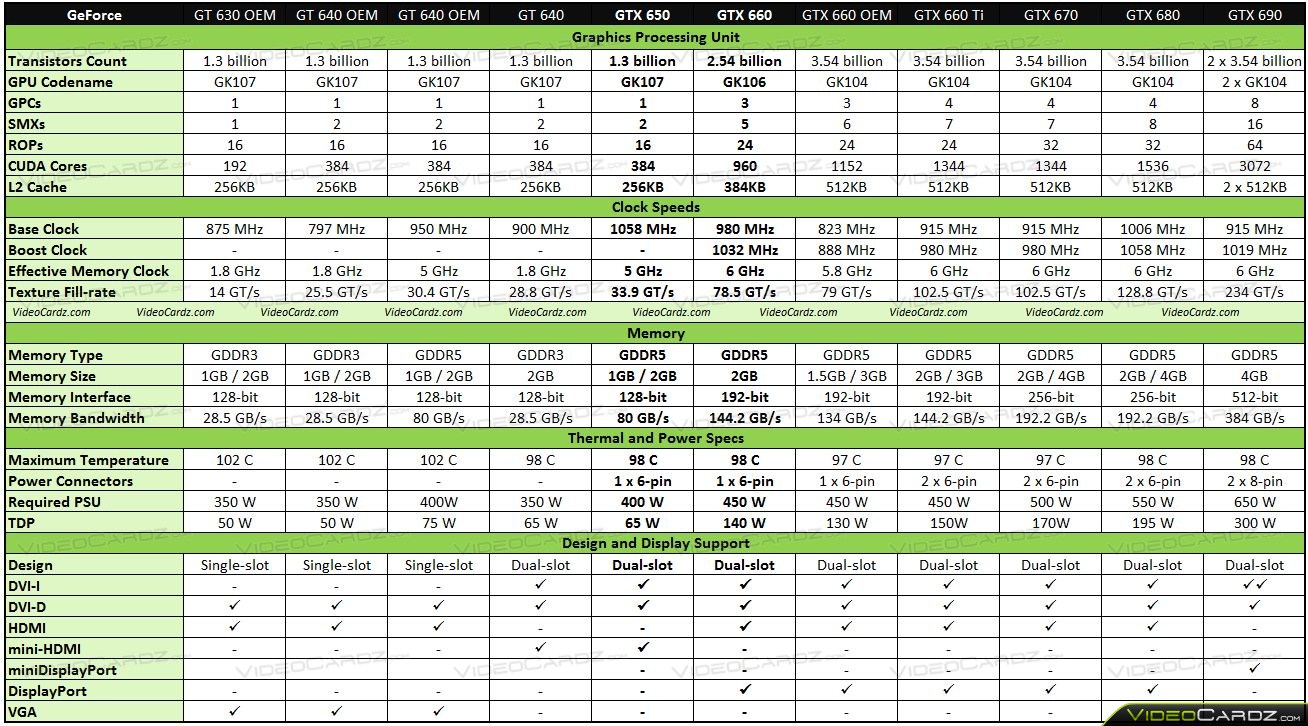 * I’m not sure which GPU is GeForce GT 630 OEM using, but it looks like a castrated version of GK107.
I double-checked the data, but if you find any mistakes, write a comment below.