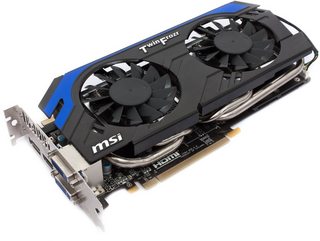 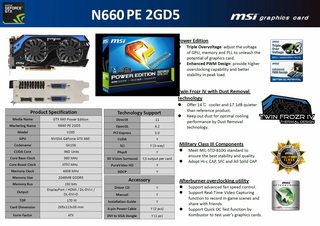 OBR-Hardware has some interesting pictures of the non-Ti version of GeForce GTX 660. According to his data, the new GTX 660 will be powered by GK106 GPU with 960 CUDA cores.

Long story short, the OEM version of GTX 660 has 1152 CUDA cores, while the retail has only 960! That’s very surprising.

We have a very detailed information straight from the data-sheet of MSI GeForce GTX 660 Power Edition. The another surprising fact is that card would still use the same 2GB 192-bit memory as the Ti version. New GeForce GTX 660 would feature a 980/1032 MHz – base, boost clock respectively, while the memory is still clocked at 6GHz.

MSI’s card looks similar to the Ti version and it looks like the manufacturer has only changed the GPU. The Chinese source says that GTX 660 non-Ti will feature the reference design known from GTX 670, GTX 660 Ti and GTX 660 OEM, so it would actually make sense – we should see another iteration of the same Phantom, DirectCU II, TwinFrozr, AMP! and GC designs.

The data-sheet suggest that GTX 660 would consume up to 170W, but this might be related to increased TDP of factory-overclocked card. The non-Ti version might still require two 6-pin power connectors.

The Chinese forums have also leaked this picture, its a GTX 650 (the non-Ti model). As you can see it comes with black design, but it’s identical to the GT 640. If you didn’t hear it already, the GTX 650 is GK107 based graphics card with 384 CUDA cores. The main difference between GTX 650 and GT 640 is the memory type – GDDR5 for GTX and GDDR3 for GT model. 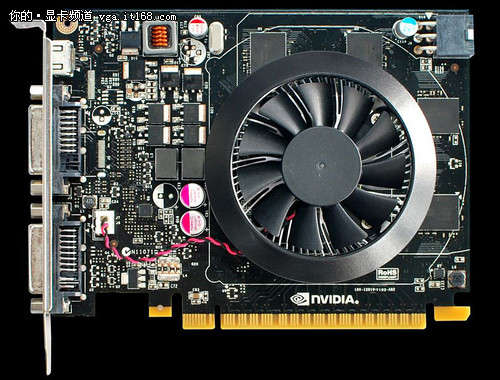 This performance chart is presenting the performance of all three mid-range cards. The first graph (red bar) is showing the Heaven 3.0 performance, the second (green) is Dirt 2, while the third (blue) is unknown. The second chart is giving a quick reference of 3DMark11 performance – according to it, GTX 660 is 30% slower than GTX 660 Ti. 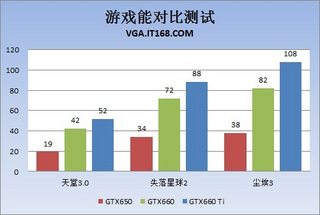 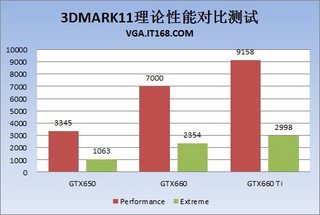 The mid-range Kepler line-up would look like this. Thanks to WCCFTech we have some more detailed information directly from Chinese site.