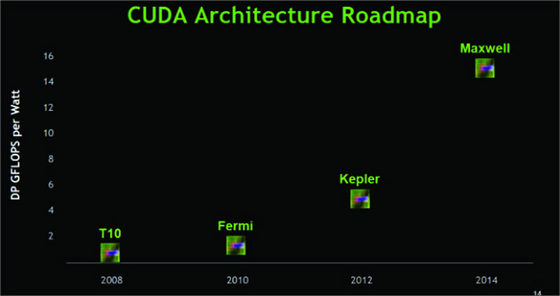 According to VR-Zone, the upcoming GeForce 700 Series may be pushed to March 2013, while the Maxwell architecture would debut in 2014.

Originally Kepler GPUs were planned for 2011, but as we know, NVIDIA released them just five months ago. Since the beginning of GeForce 600 series NVIDIA had problems with supplying enough GPUs to the market, and that is currently their main goal. As the source suggest problems with increasing the yields pushed the upcoming GeForce 700 series to next year and Maxwell GPUs to 2014. This would mean that next generation of GeForce graphics cards would be based on the similar, but still Kepler, architecture. Actually most of the enthusiasts expect NVIDIA to release GK110 based GeForce GTX 780 – something they were supposed to do this year, but instead they launched GK110 for professional Tesla and Quadro series.

Current Kepler architecture might feature only three different GPUs. The GK110 would power the professional GPUS, while the GK104 all high-end to mid-range cards and finally the GK107 for entry level models. However we are still expecting another GPU for GeForce GTX 660 (non-Ti) and GeForce GTX 650 Ti – purportedly GK106. This is a new policy to cut the spendings on every single graphics card model – that’s why GTX 660 Ti, GTX 670 and GTX 680 all have the same, yet slightly changed, GK104 GPU.

The Maxwell architecture would feature a lower fabrication process of 20nm. Also earlier reports said that Maxwell would be the first GPU to have additional CPU on board – it’s more like an APU but designated to graphics and physics computing. Anyway, we should not see any Maxwell GPU until 2014.

So it seems that AMD will be the first company to show their new Radeon HD 8000 graphics cards next year, same story again? VR-Zone claims that NVIDIA’s GeForce 700 Series would be 25-30% faster than 600 Series (nothing shocking here).

I made a very basic 3DMark comparison (this should feature gaming titles but I could not find the same benchmarks for all GPUs). Maybe Leonidas at 3DCenter.org could make a better one, or he already did – I couldn’t find.