Look what have I found. Not much of the news, but maybe an indicator? Something must be going on since it was added yesterday.

Without much fuss, PowerColor added a new section to their graphics cards series. Every single model has it’s own label, but there is one additional without any cards listed there – it’s a Radeon HD 7990.

Previous rumors suggested that HD 7990 would be released in late August. We thought that AMD might show the new dual-gpu card during the GamesCon in Cologne, but it’s already past that and nothing has been shown to the public. So AMD is either not ready to release the card, or it doesn’t even exists. But this leak from PowerColor may bring a new light to our rumor mill.

Radeon HD 7990 will be powered by 28nm New Zealand GPU (dual Tahiti XT). Card could be equipped with 6GB of GDDR5 memory. There were some rumors regarding it’s power management, that this model might require four 6-pin power connectors, instead of two 8-pins.

There are currently no leaks about it’s release date, so it’s a pure speculation. Even the dual-TahitiXT cards announced on Computex are not available yet. However, there is a hope for Devil13, also from PowerColor to be released soon.

UPDATE: Donanim Haber reports that AMD may not release a reference model of HD 7990, which means that AMD partners will have to come up with their own designs.

UPDATE2: Donanim Haber now claims that PowerColor’s HD 7970 X2 Devil 13 will actually be called PowerColor HD 7990 Devil13. Also the first specification details surface. PowerColor HD 7990 is said to feature 6GB of GDDR5 memory split into 3GB sections for each core, this would operate on 768-bit interface (384×2). HD 7990 would feature a core clock of 1 GHz (there is no data about the boost clock). The final cooling design should not be very different than the one  already shown. There is however no information about the final price. 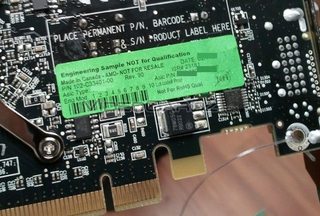