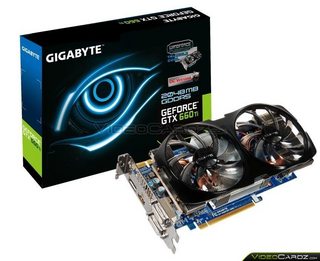 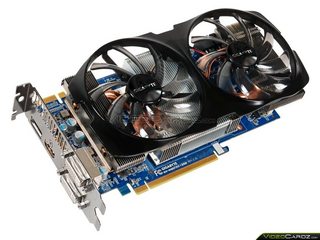 Gigabyte is preparing two cards based on GTX 660 Ti processor. I was actually wondering whether Gigabyte will use a WindForce 3X solution from GTX 670 also for GTX 660 Ti, but they decided to use WindForce 2X instead.

There will be two models of this card. One is overclocked and the other is left at reference speed. The non-OC version has default clocks of 915/980/6008 MHz (base, boost, memory), while the OC version has a boost clock of 1032 MHz (base clock is not yet revealed).

The Gigabyte GTX 660 Ti WindForce 2X OC is very similar to GTX 670 WF2X. From the visual side, it’s identical, however there is one memory heatsink missing. But besides that card is using a non-reference full-size PCB. It will utilize Ultra Durable VGA components. There is no data yet if the power design was changed, however we can notice that the capacitors have been moved, so something has obviously changed.

Overclocked model is listed on Chinese webstore for 2880 yuans ($450 with taxes). It should be available for $330-340 worldwide, while the reference clocked model at $299.