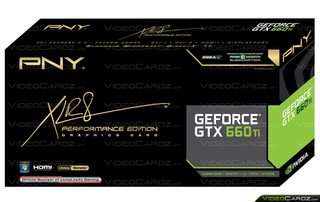 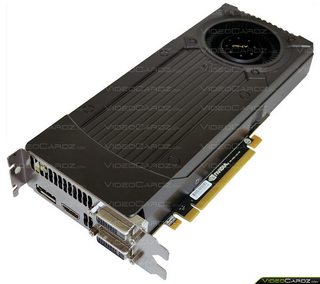 Pictures I obtained are straight from manufacturer (PNY) showing a reference design of GeForce GTX 660 Ti. I was a bit shocked that card has the same design as GeForce GTX 670 (thinking that this could be an error), but there was also a picture of the BOX, which dispelled my doubts. Even though those pictures are straight from the manufacturer, there is still a possibility that final design might be little different. Back in May, the official pictures of GTX 670 which were released by PNY shown a card only with one a sticker on the blower, while the final product also receieved XLR8 stickers on the top – this suggest that final design of PNY GTX 660 Ti will feature similar ones.

The picture below describes what I’m trying to say (PNY GTX 670).

The pictures suggest that card has the same, or similar, PCB to GTX 670. I’m not sure if this is true, but if it is, then manufacturers have yet another possibility to use the same design of coolers from GTX 670 and even GTX 680.

The card is described as a combination of power efficiency, performance, and affordability. GeForce GTX 660 Ti will be released on August 16th for $299 (However, I even found a listing for $285 – below). 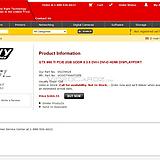