TweakTown is known for multiple breaking of NDA’s, as their relations with NVIDIA aren’t really that great. I’m really surprised that they released tthose performance charts right now. Since there are still two weeks before card is officially released. Does it mean that the launch date is set sooner than expected? Well that was neither confirmed nor denied so it seems that you will still have to wait those two weeks to grab one of those cards (TweakTown says though that the card will hit retail in mid August).

And the most importantly, final specification that nobody will call rumored any more. Card features Kepler GPU with 1344 CUDA Cores. It has lesser Raster Operating Units than GTX 670 and GTX 680 – 24 (so there are three Raster Engines with 8 ROPs each – meaning there are only three Graphics Processing Clusters). Therefore I’m guessing that GeForce GTX 660 Ti is not using GK104 silicon, but if it does, it looks very odd. That’s because every SMX has 192 CUDA cores, so there should be at least 7 of those, but in GK104 every Graphics Processing Cluster can only have 2 SMXs (there’s one additional SMX which would not fit). So NVIDIA has either removed one Raster Engine with whole GPC and one SMX or this is a completely new architecture (and that’s why TweakTown decided not to reveal the GPU-Z readings).

In 3DMark11 the GTX 660 Ti is performing about 6.4% slower than GTX 670 and 14% better than HD 7950. Those were the most anticipated comparisons. Card is also faster than HD 7970, but this is only the 3DMark performance, and in higher resolutions it will be more noticeable that 2GB card with only 1152 cores will not be faster than 2048 stream processors and 3GB in HD 7970.

Even though this review does not include the most popular games is shows that GeForce GTX 660 Ti has comparable overall performance to Radeon HD 7950. However, AMD card is much better solution if you are planning to use it with high-resolution and anti-aliasing enabled. 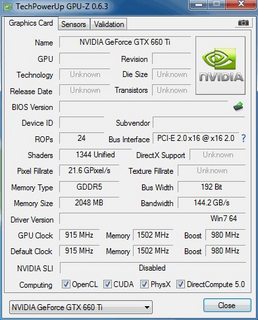 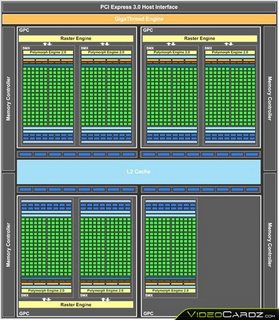