According to Benchmark.pl AMD might be preparing yet another GHz Edition Tahiti based graphics card.

The source actually refers to Expreview, where a member of their forums teased a picture of the dual-6pin powered Radeon HD 7000 card. The picture obviously presents a Radeon HD 7870, but as PHK says it’s the fourth card to enter the high-end lineup (here’s the automated translation so you can make up your own mind: “old four is something new, is what we guess that model…” or “In addition, the fourth of really new things to come, that is, we suspect that model” — yes, that can mean almost everything).

Actual Radeon HD 7950 is clocked at 800 MHz, with additional 200 MHz’s it will have a comparable performance to HD 7970 non-GHz Edition. Additionally, when supplying higher voltage, card can easily overcome HD 7970, but not every sample can operate stable at this point. Nevertheless, this HD 7950 GHz Edition is likely AMD’s response to GeForce GTX 670, which will obviously have worse performance. Moreover, if there’s anything valid in this rumors, it seems that AMD is cleaning their current stocks of Radeon HD 7900 series, so we might expect some lower prices. AMD Radeon HD 7950 GHz Edition, would be the last Radeon HD 7000 in whole lineup — assuming there’s no HD 7990 on the corner, or is there?

The chart below is based on Guru3D.com benchmarks, where they tested overclocked Radeon HD 7950 (click for enlarge). 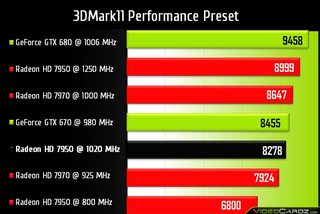 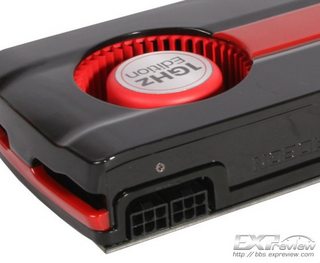