Well, the rumors are clearing out a bit. Right now, there is no SE model coming. Additionally, we are again talking about two models coming simultaneously – GeForce GTX 660 and GTX 660 Ti. One is said to be based on GK104 and the other GK106 GPU. Moreover, first leaks about GTS 650 are surfacing. Here’s the list:

Over the past few days, plenty of rumors have spread out across the web. Most of them are just constantly repeated and based on previous leaks. But some of them are particularly interesting. 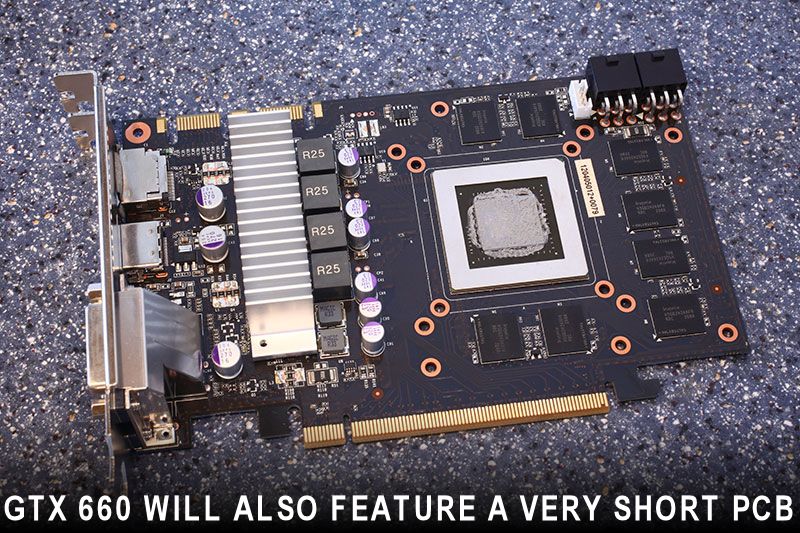 While everyone is awaiting the new GeForce GTX 660 graphics card, it’s almost certain that it will be released in July or September (most likely first week in September). There were so many rumors, that right now we are not sure of how many models can we expect. There is obviously GTX 660 card coming, but it will probably arrive in many variations. Most likely there will be non-Ti model, which is now said to feature GK106 GPU, while the Ti model should arrive with GK104. But according to a known news leaker – PHK, whose leaks are usually accurate – NVIDIA is preparing another iteration of GK104 GPU, which will be featuring the Second Edition (SE) naming. While we think about second editions, we should think about GTX 670 SE, because there is no GTX 660 yet, so how could there be a SE model? My personal thought is that there are three cards coming – including GTX 660, GTX 660 Ti and GTX 670 SE. Another idea is that all cards will be named GTX 660, just like previous generation, but therefore, SE model would arrive later, and be even more castrated (considering 560SE performance).

The third GK104 GPU is expected in upcoming month. If OBR-Hardware is right, it should not be available until September (this would confirm previous leaks from Overclockers.co.uk). That’s six months after its competitor’s HD 7800 series were released, as our commentator BestJinjo points out.

Last week, 3DCenter.org posted a new prediction of all HD 8000 Series GPUs. Those analysis are very detailed and, as it happened before, quite accurate. Instead of rewriting them in a separate post I will just put them here (with small changes). The latest news are focusing on the performance of future Radeon HD 8000 series. Softpedia reports that upcoming Sea Islands series will be at least 40% faster than current generation, but still, this is also based on 3DCenter analysis. Another leak says that Venus GPU could be actually named as “Sun”, yes, it’s sounds strange, but it’s worth mentioning. The rest is a pure speculation, which you can learn from sources below.

UPDATE: New post from PHK suggests that AMD has already launched their whole Radeon HD 7000 Series lineup, well except one card – Radeon HD 7990. This means we will not see cards like HD 7930, HD 7790.