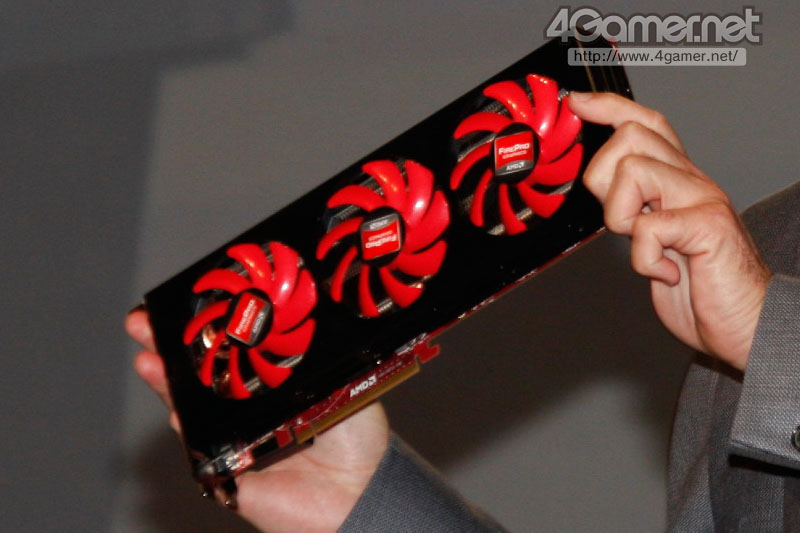 Here are some interesting news from 4Gamer.net website. During the AMD Fusion Developer Summit 2012, Mark Papermaster (a Senior Vice President and Chief Technology Officer of AMD) has showcased a new professional FirePro graphics card, which appears to be more like the alleged Radeon HD 7990 design.

Papermaster has shown brand a new FirePro W9000 professional card, which is more or less Radeon HD 7970 X2 or HD 7990 if you like. We were all expecting HD 7990 to be released during Computex, but only two manufacturers have presented their HD 7970 X2 variants instead. What is more, those cards will be released in very limited quantity, and as some rumors say, one of them is not even ready for release (PowerColor’s card is actually only a prototype).

From the slides we learn some interesting thing — those present completely different design (than showcased card), which looks more like HD 7970 card. Therefore, we have this dual-gpu card shown during the event, which is holding three fans (with FirePro stickers). So did AMD just made their Radeon HD 7990 a FirePro card? Rather not.

W9000 can operate with 4 TFLOPS for single-precission computing, and 1 TFLOPS for double-precision. This model can fill 264 million pixels per second. When you look at this table, you will learn that this FirePro W9000 card is actually a single Tahiti XT chip, only clocked around 1 GHz.

So, when we look at the specs of FirePro W9000 and HD 7970, and it’s computing power, we learn that it is obviously a single-gpu card. On the other hand, we have this dual-gpu card which is probably featuring 4096 Stream processors, along with 6GB of GDDR5 memory. It’s reference design is equipped with triple-fan (90mm low-noise) solution, which looks pretty decent. It is also possible that this card is using different GPUs, like Pitcairn. This would explain such a weak computing power with two GPUs. But as BestJinjo pointed out in comments, it has a different double precision floating point computing power – 1/16 instead of 1/4 like Tahiti. But why would AMD show two different designs?

Well, it all appears that this is actually our eagerly awaited dual-gpu card’s design. By the way, you will notice only two 8-pin power connectors on the card’s side, this would probably mean that “HD 7990” is less power hungry than HD 7970 X2 cards (those use three connectors). We will update this article when new information surfaces. 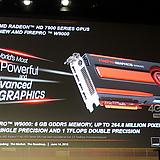 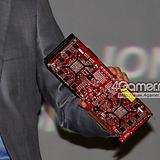 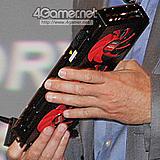 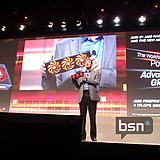