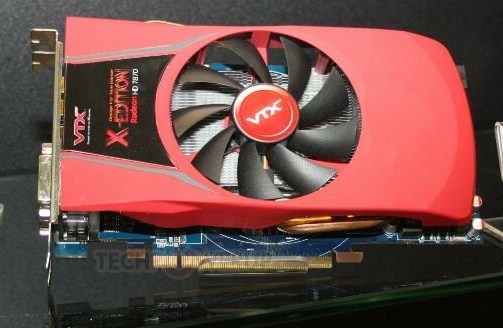 VTX3D has showcased two cards based on Radeon HD 7000 Series. Both cards are signed with the X-Edition Series brand.


VTX3D Radeon HD 7770 X-Edition is a factory-overclocked card with a clocks of 1150/1250 MHz for core and memory respectively. Card features custom design, but the only difference is the a red paint. As for the memory, it’s equipped with 1 GB of GDDR5 chips, with an interface of 128-bit. HD 7770 is a Cape Verde GPU with 640 stream processors.

Next is VTX3D Radeon HD 7870 X-Edition, which is also a factory-overclocked solution. It comes with a standard 2GB of memory. Interesting part is the fact that it’s cooling solution is actually smaller than the one mounted on HD 7770. Card has additional 100 MHz for core, with a gpu of 1100 MHz and 1225 MHz for memory. This card is featuring Eyefinity6 technology, to connect up to 6 displays at once. 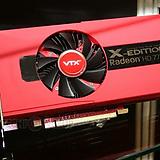