No Factory-Overclocked GeForce GTX 690 at Computex 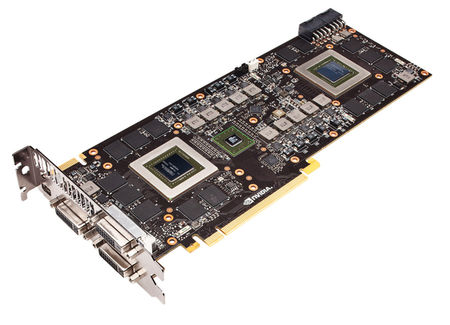 Fudzilla reports that NVIDIA is not planning to release overclocked version of $1000 worth GPU – GTX 690 – during Computex in Taipei.

The event, which is taking place in Taipei between June 5th and 9th, is a common place for new technology announcements. Many known companies present their newest products and so do GPU manufacturers. The most anticipated releases for this year are already behind us. So manufacturer might at least show new models, with non-reference cooling, factory-overclocked clocks or watercooled editions.

NVIDIA is very proud about their flagship GTX 690 GPU. They designed it so perfectly, that not a single manufacturer is allowed to change this design. Card which costs $1000 is great a solution if you already planned GTX680 SLI configuration. It’s little more complicated to overclock though, since there are two cores to set up. But for now it’s not worth buying this card at all. You can get two GTX 670 cards for as low as $800, overclock them beyond GTX 680 performance and spend extra $200 on whatever you like. But it will cost you more power consumption and it will generate more heat. According to Fudzilla, AIB partners are not even planning watercooled editions of GTX 690 board.

Also there’s still little information about upcoming dual-gpu Radeon HD 7990 from AMD. Card which everyone expects to be cheaper than GTX 690 (and it will be). Card might be available for at least $800 (speculation). A previous dual-gpu card Radeon HD 6990 had a launch price of $699.

There are still two weeks for Computex, so we might expect more leaks in upcoming days.