NVIDIA Tesla K20 To Be Based on Kepler GK110 GPU 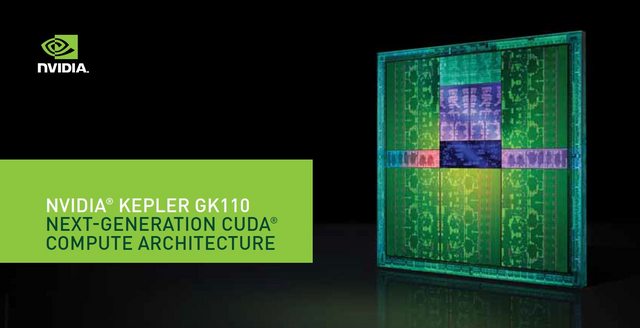 So this is where all the rumors end, GK110 is not GeForce card, it’s brand new Tesla K20 GPU, which is coming in fourth quarter of 2012 – as announced today by NVIDIA during GTC 2012.New chip is built with 7.1 billion transistors.


NVIDIA is preparing two Tesla GPUs, one is Tesla K10, based on dual-GK104 chips, which is to be devoted to high efficient computing in oil and gas exploration and defense industry. Card is based on dual-GK104 GPUs and has a memory bandwidth of 320 GB/s.

Next is Tesla K20, the GK110 GPU which is coming in Q4 of this year. It will deliver three times more double precision performance compared to Fermi architecture-based Tesla cards.

First GK110 GPUs will be incorporated into Titan Supercomputer at the Oak Ridge National Laboratory in Tennessee and the Blue Waters system at the National Center for Supercomputing Applications a the University of Illinois. 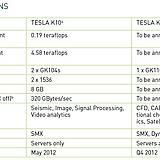 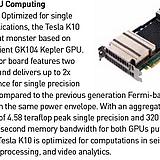 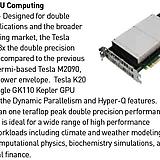 SMX
Delivers more processing performance and efficiency through this new, innovative streaming multiprocessor design that allows a greater percentage of space to be applied to processing cores versus control logic

“Fermi was a major step forward in computing,” said Bill Dally, chief scientist and senior vice president of research at NVIDIA. “It established GPU-accelerated computing in the top tier of high performance computing and attracted hundreds of thousands of developers to the GPU computing platform. Kepler will be equally disruptive, establishing GPUs broadly into technical computing, due to their ease of use, broad applicability and efficiency.”