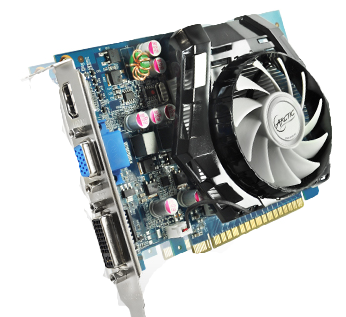 Sparkle has listed eleven new GeForce 600 Series graphics card on their pages. These are the first GeForce GT 610, 620 and 630 cards available for retail purchase. This is also the first verification of GeForce GT 610 card existence.

Sparkle has already one GeForce 600 card in its lineup — GTX 680. So far there’s no GTX 670 on the horizon, but those entry-level surely make Sparkle pages full of new cards. As you may still remember, GT 610, GT 620 and GT 630 are probably not the cards for your gaming rig. Those low performance cards are dedicated for media-center or business purposes.

GeForce GT 610 was not released by NVIDIA yet, so we may call this a leak. This model comes with three versions — two low-profile and one full pcb. They differ in cooling solutions. There’s a passive one, and two air-cooled (one with Artic Cooling fan). It looks like the GT 610 is based on the same Fermi GF116 chip as GT 620 model (well, at least with NVIDIA’s specs). Both feature 48 CUDA cores with only 8 TMUs and 4 ROPs.

GeForce GT 620 is the only card which is clocked at 700 MHz. But specifications are not the same as those officially presented by NVIDIA. According to NVIDIA this card should have 48 CUDA cores, but Sparkle has launched this as 96 CUDA cores chip. This does go forward to GT 630 card, where it has only 96 cores instead of 192. GeForce GT 630 should be a Kepler chip, Sparkle launched it with a Fermi 40 nm GPU (most likely GF108). So it’s hard to write about specs while two (reliable) sources provide different information.

GeForce GT 630 equipped with 96 CUDA cores is released in five variants, the most powerful comes with 4096 MB of memory. There are three models with Artic Cooling solution, so if you decide to grab of those look for a ‘AC’ models.

UPDATE: Some fresh news from Inno3D, they also prepared GT 630 graphics card, but with a slightly different specification: featuring Kepler GK107, with a core clock of 875 MHz and 4GB of memory. Card has 384 CUDA cores and 32 TMUs, with a TDP of 50 W. But I would take those specs with a grain of salt, because it also says that it’s lowprofile and supports 4-way SLI (seriously)

Here’s what I come up with, a full list of new Sparkle cards: