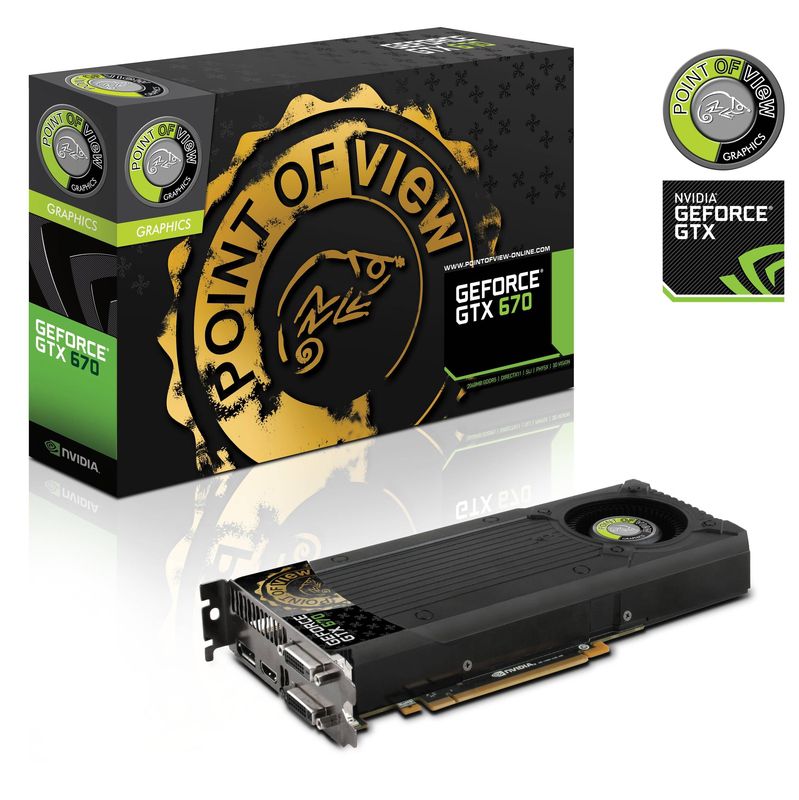 Point of View, a premier NVIDIA graphics partner and manufacturer of Android tablets, notebooks and other hardware, launches today the first card of the GeForce® 600 family: the POV GeForce® GTX 670.

The GeForce® GTX 670 is a DirectX 11 and shader model 5.0 supporting graphics card with of course existing NVIDIA features such as NVIDIA 3-way SLI® Technology, PhysX®, PureVideo® HD and CUDA™ being present!

However, the real reason to upgrade to the GeForce® GTX670 is the huge jump in raw processing power. Crush all your previous performance records with an all-new monster card! The GeForce® GTX 670 definitely walks in the footsteps of its’ GTX 680 and 690 brothers; performance wise and feature wise!

The key is the next generation streaming multiprocessor SMX technology. This design prides itself with an increased energy efficiency and better power management system. Thus a cooler and more stable card which can run on higher speeds!

Besides the new GPU architecture NVIDIA has introduced some ground-breaking performance enhancing features with the GeForce 600 series:

The first new feature is GPU Boost – an intelligent clock speed management which dynamically maximizes (or minimizes) your clock speed depending on the current demand.

Second is Adaptive VSync, which just might be the best thing ever next to the cards’ raw performance. The vSync of LCD monitors have always been a weakness for high performance gaming systems. LCD’s usually refresh at a rate of 60Hz or 30 Hz (Hz ~ refreshes per second) and offering less or more FPS can cause buffering issues and hick-ups. Adaptive VSync fixes this problem by intelligently adapting the graphics cards’ output vSync with your games’ frame rate. The result is a much smoother gaming experience.

A huge leap in gaming immersion is the new 3D Vision™ Surround implementation. One single GeForce® GTX 670 allows up to 4 connected. Also up to three can be used to create a stereoscopic 3D “inside the game” experience while keeping an eye (the fourth ‘accessory‘ display) on your email, game-guide or social media page!

One last cool new feature is enabled through the latest NVIDIA driver. As you probably know, Anti-aliasing has always been known to be very GPU intensive. However, a new NVIDIA has developed FXAA – a post-processing ‘Fast Approximate Anti-aliasing’ which offer an excellent ‘edge-smoothing’ technique without killing the performance! With NVIDIA FXAA you are ready to turn on lightning-fast anti-aliasing in a huge variety of games, automatically!

With further delay, let’s have a look at the specs of the GeForce® GTX 670:

The GeForce® GTX670 is Faster, Smoother and Richer
The newest graphics card by Point of View will be available immediately, so contact your POV retailer for more information or visit the “Where to Buy” section of our website.