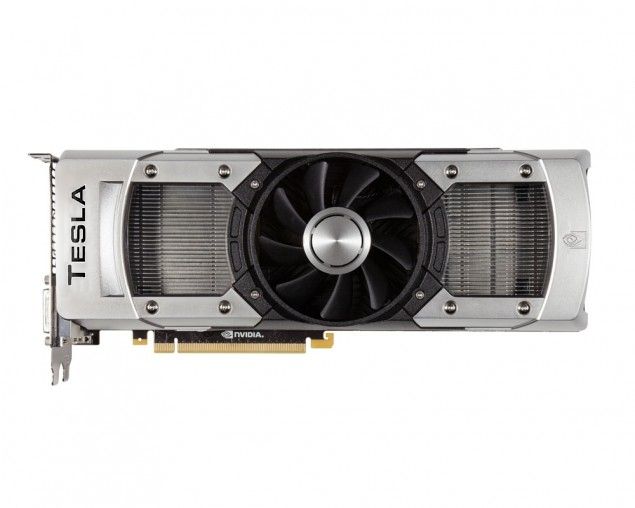 According to the BrightSightofNews, NVIDIA will launch new Tesla card in few days. A short memo released by NVIDIA said that they will present 7-billion GPU during GTC 2012 summit, but as we find out, its actually dual-GPU card.

NVIDIA is so proud of their GeForce GTX 690 card that they decided to release it as a Tesla product. The most important difference between GTX 690 and Tesla 3000 is memory size — professional variant of this dual-GPU card will be equipped with 8GB of GDDR5 memory, which is the highest memory size on a single graphics card ever released.

NVIDIA Tesla 3000 will likely have only small noticeable changes to design, probably multiple display outputs will be limited to as few as possible to add more space for wider exhaust. Card is based on the new iteration of GK104 Kepler GPU, which according to BSN, will have a great single-precision computing power, but rather poor double-precision power. This professional graphics card will be packed with 3072 CUDA Cores, 512-bit memory interface and around 300 GB/s of bandwidth. It is unknown whether GTX 690 and Tesla 3000 will feature similar performance – both cards are designed for other segments of market.

There is also a new information about GK110 GPU, which is still being developed. What we learned for sure is that the chip NVIDIA is to present during GTC is not GK110.

We expect this card to be very expensive, most probably much higher than GeForce GTX 690’s $1000 price.