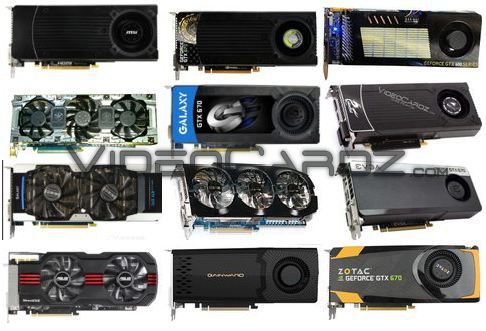 The GeForce GTX 670 launches tomorrow. According to first leaks from resellers in Malaysia, China, Australia and of course TweakTown’s review, we are expecting very efficient card, which can outperform stock GTX 680 with some additional MHz’s to the clocks.

I’ve prepared a list of all upcoming (verified) cards, which came up on multiple pages, usually online stores. Not all of them were already pictured, but we have some information that can guide you through this huge release coming tomorrow. Most of the cards are based on the reference PCB, which is quite short. So far we know about five models which will be released with full length PCB – that’s KFA2 GTX670 EX OC, ASUS GTX670 DirectCU II, ZOTAC GTX670, Inno3D GTX670 iChill Ice Dragon and Gigabyte GTX670 OC WindForce3X.

As for GeForce GTX 670 itself, it’s based on GK104-335-A2 GPU, which is a cut-down version of GK104-400-A2 (from GTX 680). It has 7 SMX clusters, which hold 1344 CUDA cores. Those clusters also pack 112 texture units with 32 raster operating units. Card will be available in two memory-size variants. On May 10th 2GB version will be released, which is based on the same 256-bit memory interface as GTX 680. Actual memory bandwidth is similar and is reported at 192.3 GB/s. Card is equipped with dual 6-pin power connectors by default, but most of the manufacturers are also preparing 6+8-pin setups.