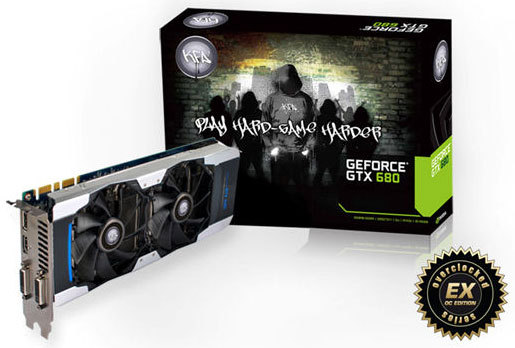 KFA2, which is actual Galaxy’s brand, has just added two GeForce GTX 680 cards to its lineup. Both feature non-reference design and clock speeds. So if you are interested in playing hard-games harder, then buckle up and meet your next graphics card. Unless, you are already familiar with Galaxy GTX 680 SC and Hall of Fame edition, because these card are actually their rebrands.

KFA2 GTX 680 Limited Edition OC arrives with triple-fan solution, which is actually known for some models from Galaxy’s and KFA2’s. It’s packed with standard 2GB of memory, which is clocked at reference speed. It all gets interesting when we mention core clock, which was highly overclocked to 1202 MHz (1267 for boost). You might remember this model as a white PCB card called Hall of Fame Edition.

The other model, which is named as GTX 680 EX OC Edition, is featuring 1110 MHz base clock and 1176 MHz boost clock. Card is equipped with dual-fan cooling solution. According to the source, it will be released in two variants – 2GB and 4GB.

There’s no information about availability and price yet.