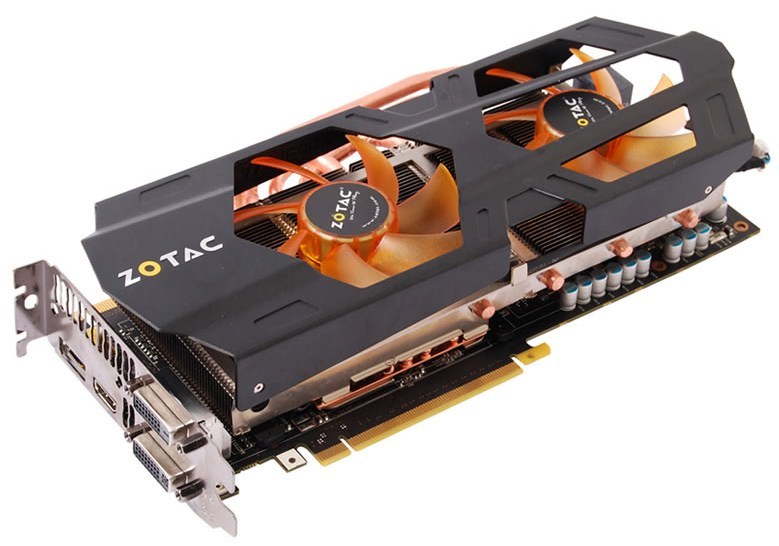 Zotac has released their two new flagship cards, one featuring powerful non-reference design and the other with additional 2GB of GDDR5 memory. AMP! Edition has one of the highest clocks from every GTX 680 available on the market.

ZOTAC GeForce GTX 680 AMP! 2GB Edition (ZTGTX680-2GD5AMPR001) comes with three-slots wide cooling solution, which has two 90mm fans which are controlled automatically. ZOTAC put 1110 MHz to the core, with 1176 MHz boost clock. Memory remained at the reference value with 6008 MHz effective clock. Unfortunately, this model was equipped with only two 6-pin power connectors, which may be a bottleneck for even more juicy overclocking. You can check a review of this model on techPowerUP.

ZOTAC GeForce GTX 680 4GB OC Edition (ZTGTX680-4GD5R001) is featuring reference clocks with 1006 MHz for base clock and 1058 for boost. The only noticeable element is the additional 2 GB of memory, which will be helpful with ultra high resolutions. If you don’t posses large monitor, or set of monitors, then it’s not really the card you should be buying, since the performance differences between these 2GB and 4GB models is very low.

Both cards were equipped with two dual-DVI, one HDMI and DisplayPort display outputs. ZOTAC adds Assassin’s Creed 3-game pack to these two cards. Actual price is not yet verified for every region, but in Japan you should prepare at least $750, because that’s the actual price of these two.