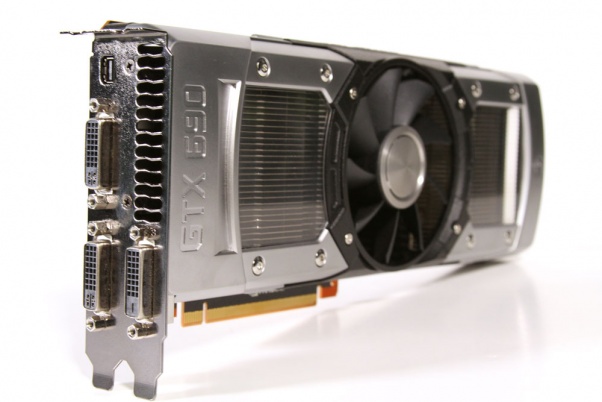 If you were wondering whether GTX 690 is actually faster than GTX 680 SLI configuration or better than HD 7970 Crossfire, then you will be interested in those reviews. I will update this article with new reviews, as they are published.

The NVIDIA GeForce GTX 690 is the finest looking, best performing, most efficient dual-GPU video card in the world with unsurpassed design and engineering. The GeForce GTX 690 not only performs in terms of framerate, but also performs in terms of thermals, TDP, acoustics, and aesthetics. This is the “most perfect” dual-GPU video card we’ve ever experienced.

Putting money and features aside for a moment, some will question whether a card like the GTX 690 even has a place in today’s market. We think it does, particularly from a marketing standpoint. But questions have to be raised about a dual GK104 card launching at a time when retailers are still struggling to deliver GTX 680 cards. This is a true halo product that will elevate NVIDIA’s standing in the eyes of gamers but many of their customers are still waiting on GTX 680 backorder lists. The GTX 690 may be the fastest graphics card around but it is also completely unaffordable for anyone without very deep pockets or a nice trust fund. Yet for those that can afford it, the GTX 690 is the pinnacle of uncompromising graphics card design. It delivers unheard of performance and stretches our expectations of what’s possible in the GPU market.

Holding NVIDIA’s GeForce GTX 690 is the first hint that NVIDIA created something special. The new card feels great thanks to the dominant use of metal, both with shiny and rough surfaces. Thanks to the used magnesium alloy it is still much lighter than other dual GPU cards. Highlights like the metal screws, the Plexiglas “windows” and the glowing rubber GeForce logo add to the experience.
In terms of performance we see stunning numbers, that almost exactly match the performance of a dual card GTX 680 SLI setup, despite the lower clocks on the GTX 690. NVIDIA’s new dynamic overclocking algorithm is hard at work to provide these great performance results and it works well, without any glitches. We also found that additional manual overclocking is possible, which provided an extra 14% performance boost in real gaming. Normally we see reduced overclocking potential from dual GPU cards, due to power and heat concerns, not so with the GTX 690.

Graphics cards like shown today are for the cream of the crop gamers and hardware guru’s out there — the enthusiasts. Remember, you’ll need a fairly powerful PC, a monitor resolution that starts at 1920×1200, preferably is 2560×1600 or heck even three monitors. Also remember that one GeForce GTX 690 supports surround vision with up-to three monitors as well. If you can afford it all, you’ll have a smile on your face like the Joker in Batman. So I’ll end this review with nervous Joker like laughter, and head back to gaming. Now bring on Sniper Elite, Diablo III and Max Payne 3 okay ? May and June are looking good. Yummie :)

The new NVIDIA GeForce GTX 690 4GB dual-GPU Kepler graphics cards is easily the fastest and highest performing gaming solution on the market. As we often state here, if you have the money to spend, this is the place to do it – a $1000 GPU is going to net you a better improvement in gaming experience than a $1000 CPU, that’s for sure. By combining a pair of GK104 parts on a single PCB, and constructing an incredibly sexy cooler to go along with it, NVIDIA has crowned a new king.

Wrapping things up, there is one question left I feel like we still don’t have a good answer to: how much RAM a $999 card should have. NVIDIA went with a true equal for the GTX 680 SLI, right down to the 2GB of VRAM per GPU. Looking back at what happened to the Radeon HD 5970 and its 1GB of VRAM per GPU – we can’t even run our 5760×1200 benchmarks on it, let alone a couple of 2560×1600 benchmarks – I’m left uneasy. None of our benchmarks today seem to require more than 2GB of VRAM, but that much VRAM has been common in high-end cards since late 2010; the day will come when 2GB isn’t enough, and I’m left to wonder when. A GTX 690 with 4GB of VRAM per GPU would be practically future-proof, but with 2GB of VRAM NVIDIA is going to be cutting it close.

Nvidia GeForce GTX 690 2×2 GB is the world’s fastest graphics accelerator being as much as 95% faster than the today’s flagship single-GPU Nvidia product – GeForce GTX 680 2 GB. The new Nvidia creation boasts mind-blowing performance, which is so incredibly high that it simply makes no sense to invest in this card unless your monitor supports resolutions above 1920×1080. And in 2560×1600 resolution, which is currently the highest resolution possible (on single-monitor configurations), GeForce GTX 690 will deliver comfortable gaming experience in any contemporary game even with enable antialiasing. And this performance won’t be excessive in such games as Metro 2033: The Last Refuge or Total War: Shogun 2.

We haven’t even started exploring the GTX 690’s overclocking options, nor have we done all the benchmarking we want to do, but from our initial tests it’s an astonishingly fast single-card SLI setup that takes up less room and draws less power at idle than multi-card setups. And, of course, if you have two of them you can enable Quad SLI. Yes please. For the price of two GTX 680s, you get the power of two GTX 680s on one board. That seems pretty fair. The GTX 690 is available starting today from a slew of Nvidia partners with an MSRP of $999.

Nvidia has done a remarkable job with the GeForce GTX 690, turning out a card that’s worth bragging about—and bestowing our Editors’ Choice award upon—for reasons that go well beyond merely its speed. We have no doubt that AMD is working on its own dual-GPU card at this very moment (we’ll even venture a guess at its name: the Radeon HD 7990?), but unless the company effects a substantial revamp of its current generation’s architecture, that card is going to have a hard time competing with Nvidia’s. In performance, power usage, and appearance alike, it’s not just the card to beat—it’s the card to cherish.

To say that I was impressed with what the GTX 690 has to offer would be an understatement. In the past NVIDIA has delivered excellent gaming performance when they dropped a dual GPU card on the market such as the 9800GX2, GTX 295, and the GTX 590. Each offered significant gains in the all important FPS arena but suffered from the same challenges of running two GPUs on one card with increased power consumption and compromises made to cooling the card down that resulted in lower clock speeds than single GPU cards. The GTX 690 for the most part is almost immune to these challenges with a robust 10 phase power circuit and 10 layer, 2oz copper PCB to manage the power needed to maximize performance and stay within the 300 watt TDP of the card; in most games running near a quoted 276 watts. Ironically this is the consumption delta between the idle and load results I saw in my testing at stock speeds.

Benchmarking Nvidia’s new GeForce GTX 690 almost wasn’t even necessary. The company gave us a great idea of what to expect when it told us that its new Death Star would be fully operational, featuring two uncut GK104s. A slightly lower base clock suggested average performance just a smidge below two GeForce GTX 680s—but certainly not enough to be noticeable while you’re gaming.

When it comes to the performance results, the NVIDIA GeForce GTX 690 easily becomes the fastest gaming graphics card that we have ever tested. It is also one of the better looking cards that we have ever used as well. You can tell that NVIDIA left no stone unturned and has tried to make this product the best video card the company has ever released. The GeForce GTX 690 is a revolutionary product as it raises the bar for what one will expect to get from a flagship video card. The NVIDIA GeForce GTX 690 has a suggested retail price of $999, so the use of exotic materials actually helps reduce the sticker shock a little bit. No one wants to drop a thousand dollars and get a cheap looking product that also feels cheap in your hands. NVIDIA made sure that customers will not experience that with the GeForce GTX 690.

A great performer out of the box with excellent build quality and design. The fantastic overclocking potential irons out minor performance issues at 5760×1080 to ensure the GTX 690 is the best graphics card ever made.

Let’s cut right to the chase, the GeForce GTX 690 4GB graphics card is aimed at a small band of computer users identified as ultra-enthusiasts. These people care about having the shiniest of technology and possess the inclination and ability to pay for it. GTX 690 is the world’s fastest graphics card… by some distance. It manhandles the previous-generation GTX 590 and benchmarks at a level that’s consistent with two premium GeForce GTX 680s running in SLI. Such is its visceral power that one really needs to pair it with either a 30in, 2,560×1,600-resolution monitor or three screens driven by NVIDIA’s (3D) Vision Surround technology. Best of all, it can do all this from the card’s trio of DVI outputs.

Overall, the GTX 690 is hands down the best-of-the-best. It offers best-in-class performance, noise and thermal levels, and is extremely efficient considering the raw gaming power. It is also designed for Surround and 3D Surround technologies, being the only single PCB solution available that can play any game at 5760×1080 without stutter. However, at $1000 it is an exclusive and expensive product, but if you have the means to enter the club, you won’t be disappointed.

With the GTX 690, NVIDIA is essentially able to cram two of the fastest GPU into a single card and the result is rather impressive. The GTX 690 delivers about 90-95% of the performance of two GTX 680’s in SLI, while consuming 80 fewer watts of power. Not only is the card much more power efficient, it is also quiet thanks to the vapor chamber heatsink. While the card may not be exactly as fast as two GTX 680, the trade off is definitely worth it.