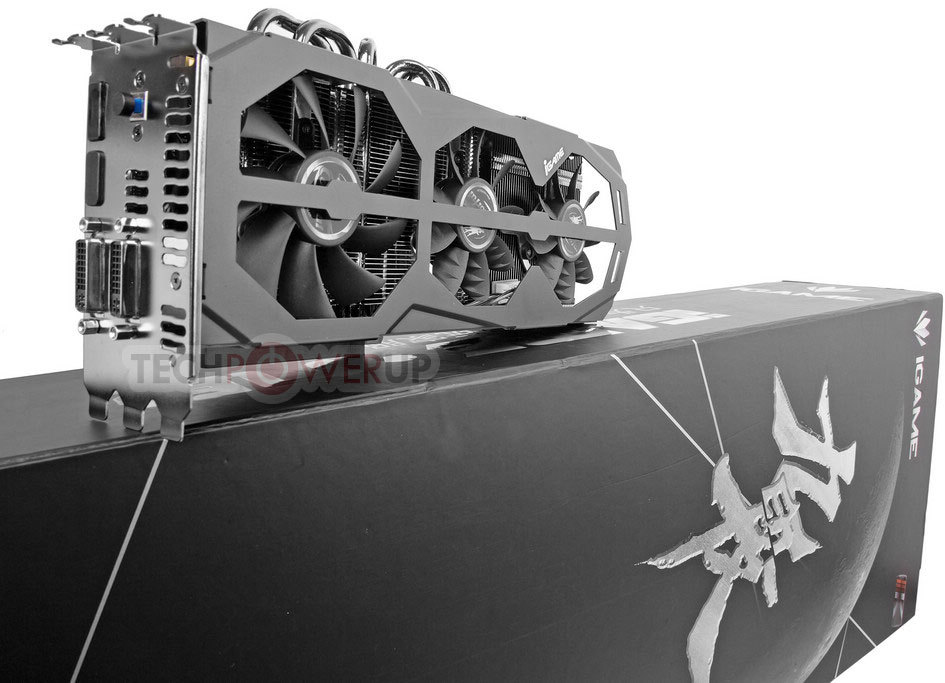 Colorful announced its most powerful GTX 680 named “iGame GTX680-2G Kudan “. The first “iGame Kudan” graphics card was released last year, and it was a GTX560Ti. Now Colorful uses the design concept on the latest GK104 chip.

Like the first generation, iGame GTX680 Kudan equipped a huge cooler which requires three slots and assembles three fans, one is 90mm, and others are 80mm and with “Shark Bionic” design in order to reduce the noise. Below the triple fans, there are heat-sinks which are crossed by ten 6mm heat-pipes. A 3mm steel plate is covered on the back of the PCB in order to enhance the PCB and improve the heat radiation.

The card is based on Silver Plated Technology of the PCB, and it has 8 phases native VRM, but when you install the Power-kit in the accessories, it will provide extra six phases of VRM. This kind of design draws power from two 8-pin power connectors. The VRM is controlled by an uP6208AM PWM chip, and the modulation range is from 0.1MHz to 1.5MHz.

There are two BIOS chips are built on the main PCB and each of them stores a set of clock. The clocks are controlled by the button on the rear plate. When users press the button, the clock will be boosted to 1059MHz/6008MHz from default clock (1008MHz/6008MHz). However, when you install the extra Power-Kit into the slot on the back of the PCB, the clock will boost to 1110MHz/6208MHz!

The first set is called Air-Kit, which is assembled by five detachable heat pipes that draw heat from the main heat-sink. The Air-Kit can be installed to the corresponding position that previously prepared on the graphics card, and can efficiently reduce the heat of the graphics card.

The second set is called Power-Kit, which is introduced in the previous paragraph. The Power-Kit provides extra six phases of VRM, and equips the strongest BIOS; it is the first choice when users overclock this card after installing the Power-Kit.

The third set is called Color-Kit, which is made up by acrylic paints and brushes. It is provided for those users who have interest of painting on the shell of the cooler.

Colorful iGame GTX680 Kudan is first provided in Asia, and will be also available in other regions later. This card should be available for around 5000 Yuan or $799.