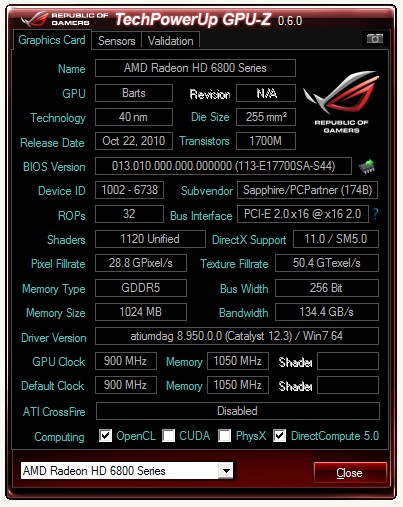 TechPowerUp released the latest version of GPU-Z, the PC enthusiast community’s favorite graphics subsystem information and diagnostic utility, which gives you up to date information about your installed graphics hardware, and helps you monitor clock speeds, voltages, temperatures, and even exotic readings such as video memory usage and ASIC quality (on supported graphics cards). Version 0.6.0 introduces a host of new features, including refined support for upcoming NVIDIA Kepler architecture GPUs, such as GeForce GTX 680, and GeForce GT 6x0M; and the recently-launched AMD Radeon HD 7800 series.

GPU-Z also embraces an installer, which places shortcuts, and an uninstall entry. GPU-Z can very much also be used as a portable, standalone utility, without needing an installation (just choose not to install, and use it standalone instead). AMD altered a high-level API with its Catalyst 12.2 drivers, which GPU-Z conventionally uses to talk to the hardware. Those updating from older Catalyst versions to 12.2 won’t see its effects on older GPU-Z versions, but those with Catalyst 12.2 “clean-installed”, might. GPU-Z 0.6.0 addresses this issue, and should now work normally with systems running Catalyst 12.2 clean-installed. A large number of other changes were made with version 0.6.0.