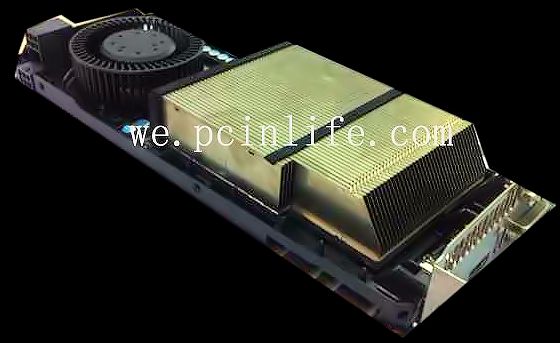 Guys at PCINLIFE have posted yet another pictures of GTX 680/670 Ti (both cards are to be released on the same day). GeForce Kepler graphics will have a huge cooling solution, and by looking at the pictures we may assume it will be also heavy card.

GeForce GK104 is a new gpu based on 28nm process. Card is to feature new technology of Dynamic Overclocking (a.k.a. Dynamic Clock Adjustment or Speed Boost) and optimized PhysX algorithms built into gpu.

According to the pictures from PCINLIFE, card will be equipped with two DVI outputs, one HDMI and DisplayPort.

GeForce GK104 will be cooled by another variation of Vapor Chamber solution. It’s very similar to the one from GeForce GTX 580. Vapor Chamber is covered with a large stack of aluminum fins.

Also another picture of final brown PCB was leaked. It looks the same as the leaked diagram suggested. Picture also presents a 6+6 pin power connector, which released lots of rumors earlier. Card will require up to 300 Watts. There is an additional 8 pin power connector (not shown on the picture), which is likely left for future variants of Kepler.

As latest rumors suggest, NVIDIA may release both GeForce GTX 680 and 670 Ti on the same day. Both cards would be based on the same gpu, which is GK104.

User of Expreview forums has posted benchmarks estimates in 3DMark 11 with Extreme Preset. We made a simple graph to present them.

Both cards are expected to be presented on 12th March and officially released on 23rd.