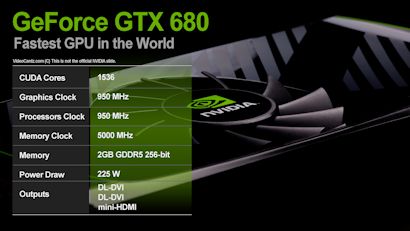 Yesterday we were informed by multiple sources about specification of upcoming flagship GeForce GTX 680 graphics card from NVIDIA. GTX 680 will likely be based on GK104 gpu. According to PCINLIFE specification posted yesterday on Bright Side of News and earlier on 3DCenter portal, matches the one posted in November on Chiphell forums.


These specifications are not accurate. For detailed GTX 680 specs visit here.

The chart released months ago has very similar data to the specifications posted this week by multiple portals (obviously not the one by Lenzfire – pure fake). PCINLIFE have decided to release yet another chart with GK104 (possibly GTX 680) benchmarks. Card is much faster than its predecessor GTX 580. According to this data, it is even faster than Radeon HD 7970, making it the fastest single gpu ever built. Tests were performed on overclocked clocks. Rumored default settings are 950 MHz for core and 1250 for memory, while this card was tested with 1050/1450 settings – suggesting that GTX680 has a great overclocking capabilities.