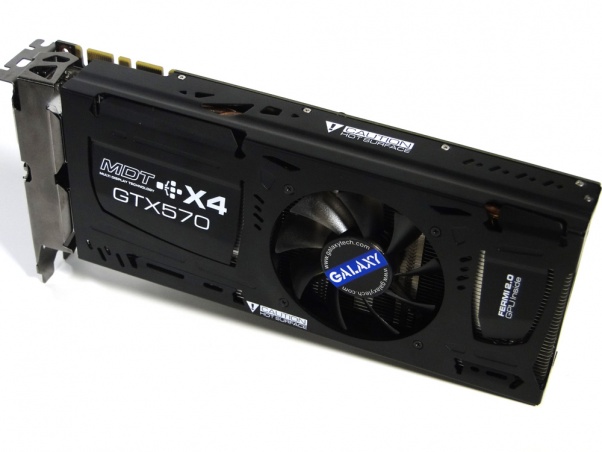 One of the key selling points for the AMD Radeon series of graphics cards the last few generations has been Eyefinity – the ability to run more than two displays off of a single card while also allowing for 3+ display gaming configurations. NVIDIA-based solutions required a pair of GPUs running in SLI for this functionality, either standard SLI or the “SLI-on-a-card” solutions like the GTX 590.

However, another solution has appeared from Galaxy, an NVIDIA partner that has created a series of boards with the MDT moniker – Multi-Display Technology. Using a separate on-board chip the company has created GTX 560 Ti, GTX 570 and GTX 580 cards that can output to 4 or 5 monitors using only a single NVIDIA GPU, cutting down on costs while offering a feature that no other single-GPU solution could.

Today we are going to be reviewing the Galaxy GeForce GTX 570 MDT X4 card that promises 4 display outputs and a triple-panel seamless gaming surface option for users that want to explore gaming on more than a single monitor inside the NVIDIA ecosystem.