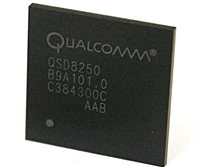 Qualcomm has released a white paper detailing the improvements due in the second generation of its popular Snapdragon ARM-based system-on-chip design, and for those who’ve read Nvidia’s work some things will seem remarkably familiar.

The broad details of the Snapdragon ‘Krait’ S4 series were already well known, as outlined to us by product management veep Christiano Amon at the company’s Innovation Qualcomm event earlier this year: built on a 28nm process, the S4 series will include single-, dual- and quad-core parts running at speeds of up to 2.5GHz and with dual- or quad-core Adreno graphics processors.

A few days after Qualcomm’s presentation, rival ARM licensee Nvidia released a white paper describing its competing Tegra 3 ‘Kal-El’ processor, a five-core design featuring a patented technology known as ‘Variable SMP,’ or vSMP. Although Nvidia might hold the patent on that particular trick, Qualcomm’s got something similar of its own planned for the S4 series: Asynchronous SMP, or aSMP.

It’s not quite as clever as Nvidia’s equivalent, however: while aSMP allows Qualcomm to adjust the clock speed and voltage of each processing core on the SoC independently, the company’s design doesn’t include the ‘Companion Core’ of Nvidia’s Kal-El product – a lower-power fifth CPU core, designed to pick up the load for background tasks and which allows the main four CPUs to be completely deactivated to save power.