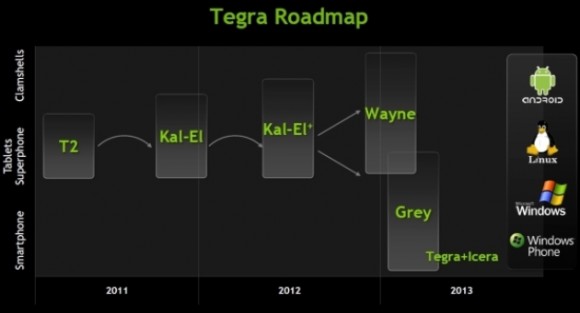 We’ve already heard about Nvidia’s upcoming quad-core processors a time or two before but that doesn’t mean our interest is any less piqued. Especially not with new roadmaps of Nvidia’s 2012 and 2013 mobile processor platforms leaking out.

As the roadmap above shows, Nvidia will have three new processor platforms debuting next year. More interesting, however, is the forking of Nvidia’s Tegra line after Kal-El+ into two distinct sub-platforms: Wayne (high-end smartphones + tablets) and Grey (mid to low-end smartphones).

It’s all exciting news that makes us take a step back considering Nvidia has yet to ship any Kal-El quad-core hardware. Though such goods are rumored to start hitting the market later this year/early next. Sadly that’s where there details end. As many of you out there already know, the mobile industry (among others) never sits still.