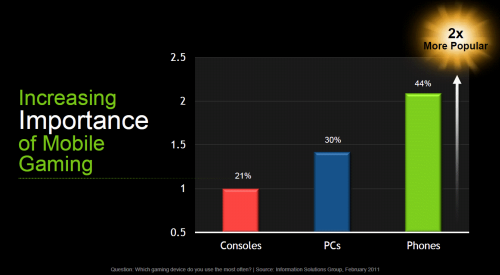 Until the end of June, NVIDIA managed to sell ten millions of Tegra 2 SoCs (system-on-chip), which is not a small achievement by any measure. Even more interesting is that just with upgrading from Android 3.0 to 3.1, you can expect performance jump from 10 up to 40% on this platform, depending of application. Another thing is that while Tegra 2 was development platform for Honeycomb 3.0, newer versions bring support for other platforms.

One of the slides that got our attention is dated from February this year. We are not sure what is bigger surprise, the fact that mobile phones are leading gaming platform, or the fact that PC is more common gaming platform then consoles, and by the healthy margin too. Of course, games in question are mainly casual games such as those on Facebook, but nevertheless the results are still interesting. 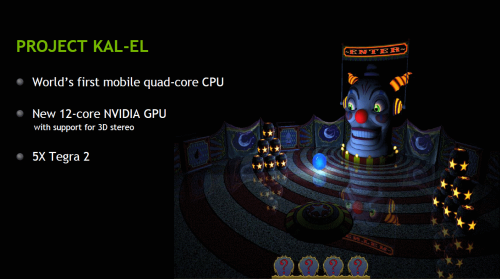 If you have a Tegra base device, you probably have Tegra zone installed. That’s practically Android market in small, but for the games that are optimized for Tegra platform. Right now, there are 18 games, which don’t sound as such big number but still, these games look much better compared to their not Tegra optimized counterparts, making them more appealing for gaming. Good thing is that NVIDIA is in close communication with developers, and they promise that number of the games will increase up to 50 by end of the year. While we are speaking about Tegras, next Tegra codename Kal-El is still scheduled to make appearance by the end of this year. New GPU part with support of 3D stereo will use 12 stream cores and is promising 5x better performance compared to Tegra 2. CPU part will be a quad core instead of dual core utilized in Tegra 2, with clocks unknown at this time, but probably a bit higher than 1GHz speed that common these days.