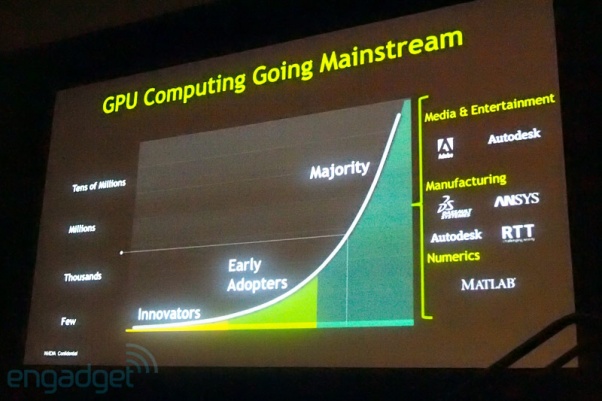 It’s that time of year again, SIGGRAPH is upon us. The same graphics showcase that brings oohs and ahhs over the latest in ray tracing generated graphics each year has seen NVIDIA bring multi-GPU, scalable Tesla computing power and professional graphics for mobile devices delivered using the Internet at SIGGRAPH 2011. The multi-GPU and cloud based graphics technologies have been dubbed Project Maximus and Virtual Graphics respectively.

According to Engadget, Project Maximus sees NVIDIA opting to recommend a lower end Quadro card and combining it with an almost infinitely scalable Tesla powered cluster. The light Quadro card would handle all of the graphics duties in displaying the desktop and applications’ output while the attached Tesla processors would be responsible for handling all of the underlying computationally intensive calculations. This option will be especially interesting for businesses and professional designers as they will be able to allocate to each user only the power they need to get the job done, and future upgrade-ability would improve by allowing more Tesla processors to be added as opposed to a whole graphics system overhaul. Engadget quoted NVIDIA in further clarifying that in some programs, “better performance is achieved by adding a Tesla companion processor, as opposed to scaling up the primary Quadro graphics. Users still require as much graphics as possible.”

Virtual Graphics on the other hand is NVIDIA’s technology preview that aims to bring quality graphics to numerous devices so long as they have a solid internet connection. Much like onlive is able to stream games to low end computers, NVIDIA’s virtual graphics technology seems to be pushing professional level graphics to mobile devices by using graphics card clusters based in the cloud to deliver much more graphical prowess than the mobile SoC (System on a Chip) graphics processors can provide alone. Branching off from Virtual Graphics technology is Project Monterrey, which is an initiative to bring NVIDIA Quadro level graphics on an application agnostic basis to any device capable of maintaining a solid internet connection.