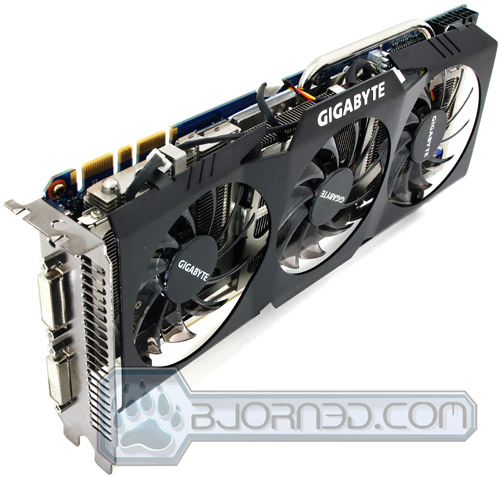 It has been a while since we have reviewed a GTX 480 video card, and with the newly released GF114 GTX 580 GPUs, NVIDIA announced that their older GTX 480 (GF100 GPUs) have been discontinued from production. Interestingly, in November 2010, GIGABYTE still announced their highly anticipated GTX 480 Super Overclock video card (also known as the GTX 480 SOC), and it seems that there are still quite a few cards available online. GIGABYTE is famous for their Super Overclocked cards, which use very high quality components that not only provide fantastic results under factory overclocked settings, but also allow users to run their cards at frequencies above the already highly-overclocked specifications that other manufacturers have. These cards are designed with extreme overclockers in mind, providing them with features and voltage settings that require exotic cooling (LN2) or powerful water cooling to keep the card cool. In return these cards can reach frequencies unmatched by most others on the market. GIGABYTE also installed a more efficient vapor chamber designed air cooler with their triple fan design. With such cooling, the users can enjoy overclocked performance at quiet operation while maintaining great temperatures during full load.

The GIGABYTE GTX 480 SOC has quite a bit of performance up its sleeves. With factory overclocked frequencies, the GTX 480 SOCruns at 820 MHz Core Clock speed, 1640 MHz Shader Clock (or in another words Processor Clock speed), and 3800 MHz memory Clock frequency. The reference speeds from NVIDIA that most manufacturers use on their stock cards run at 700 MHz Core Clock, 1401 MHz Shader Clock speed, and 3696 MHz memory clock frequency. So we can definitely see some performance increase in the frequencies all around. With the GTX 480 SOC’s components and cooler, there is more overclocking potential possible, and it will be interesting to see if it is possible to reach the speeds that current GTX 580s run at without breaking a sweat on overclocking.