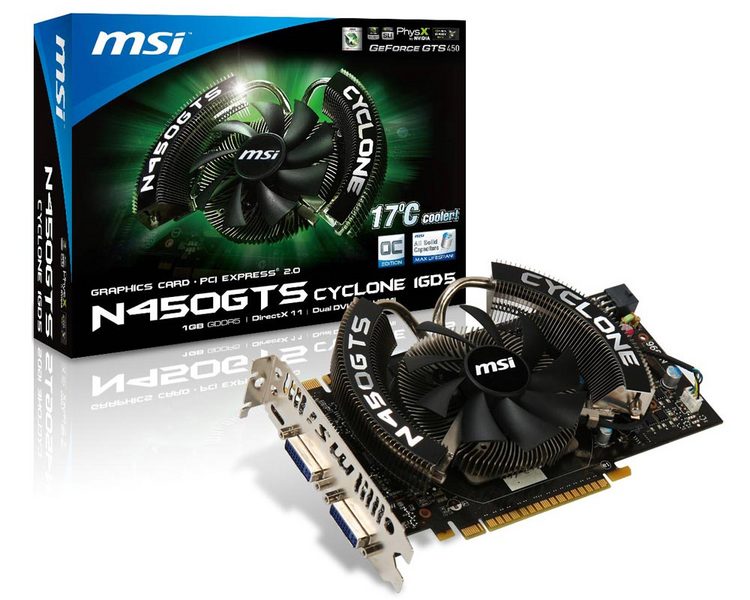 MSI, the world’s renowned graphics card and motherboard manufacturer, today officially launched the N450GTS Cyclone series of graphics cards, which are equipped with NVIDIA GeForce GTS 450 GPU core. With MSI-exclusive Cyclone thermal design and a 9cm PWM fan, not only its airflow enhanced by 50%, but a whopping 17 °C temperature reduction can be achieved when compared the reference design. Using MSI’s exclusive overclocking software, Afterburner, users can adjust the GPU voltage and increase the overclocking rate significantly.In addition, all-solid capacitor components are used in this series, which gives users high stability and a long product lifespan. Also supported is the NVIDIA PhysX & 3DVision technology, which offers gamers an all-new visual experience and makes this series of graphics cards from MSI the superior choice for serious gamers who want to get the most value out of their card.

MSI’s Exclusive Afterburner Overclocking Software
The N450GTS Cyclone series of graphics cards is equipped with all-solid capacitor components and offers users a highly stable product with a long lifespan. Moreover, when used in conjunction with MSI’s exclusive Afterburner overclocking software, the user can adjust the GPU voltage to achieve its full effectiveness and increase the overclocking rate. Thanks to the advanced fan speed control function, which detects temperature during operation, users can maintain stable performance under overclocked conditions. In addition, the models are equipped with the ability to adjust the clock speed of the GPU and memory instantaneously, a real-time monitoring interface, and the Kombustor stability testing tool, giving gamers the power to control the unit’s overclocking status at any time.