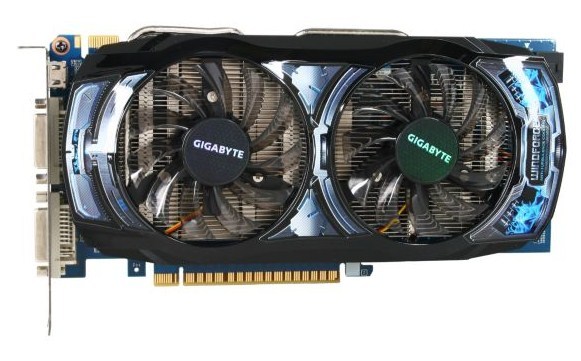 Gigabyte is readying not one, but two distinct GeForce GTS 450 graphics card designs, which will deck up the company’s launch catalogue for this SKU: the first is a more cost-effective design, on which is based the GV-N450-1GI, while the second one is geared for OC variants (such as the GV-N450OC-1GI) and is designed for overclockers. The easiest way to identify this design on a sealed box is the mention of a “WindForce 2X” cooler that features a dust-reducing design.

Specifications wise, the GV-N450-1GI sticks to the essentials, and features a no-frills PCB and cooler. Its cooler makes use of a heatsink with forked, spirally-projecting aluminum fins, which draw heat away from a copper GPU base. This model sticks to NVIDIA reference clock speeds of 783/1566/900(3600) MHz core/shader/memory(memory effective). Along with every other base model, it is priced at $129.99. The second card, the GV-N450OC-1GI, features a longer PCB, with better components that support higher clock speeds, and is overclocker-friendly, in case you decide to go beyond its clock speeds of 830/1620/902(3608) MHz. This card features a robust-looking cooler that features a dense aluminum fin array, to which heat is conveyed by two 8 mm thick heat pipes, cooled by two fans. This card is priced just $10 over the base model. Both will launch early next week.