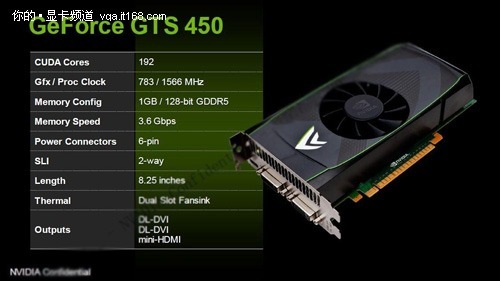 Chinese website IT168 posted slides leaked from the GeForce GTS 450 press presentation. The slides reveal the final specifications of the upcoming GPU, as well as show the market positioning. To begin with, the GTS 450, as mentioned in numerous occasions, has 192 CUDA cores, 1 GB of GDDR5 memory across a 128-bit wide memory interface, and clock speeds which include 783/1566/900 MHz (core/shader/memory); but the slides confirm that NVIDIA’s reference design cooler looks nearly identical to the GeForce GTS 460, at least as far as the cooler shroud and fan goes.
Other specifications confirmed are the TMU count: 32, four Polymorph engines (should translate into 16 ROPs), power input being just one 6-pin PCI-Express connector, and card max power draw of just 106W, nearly 2/3 that of the GTX 460.

NVIDIA is positioning this SKU to be the successor to the popular GeForce GTS 250, which held the sub-$200 and later sub-$160 markets for NVIDIA, for quite some time. Its target buyers are those which need a light on the pocket graphics card for LANParty rigs. The card can afford users smooth gameplay of the latest DirectX 11 titles at 1680×1050 with 4xAA. Unfortunately, what we’re looking out for the most (price), isn’t mentioned. Perhaps NVIDIA will stabilize the price of this SKU based on how it plays out against competing SKUs. Speaking of which, the ATI Radeon HD 5700 series is in this card’s crosshair.